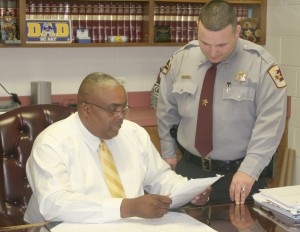 WINTON – It doesn’t matter where he goes – the office, church, the barber shop or Wal-Mart – he’s still at work.

No matter what time of day or night it is, the telephone may ring and it’s time to get up and get to work, but Hertford County Sheriff Juan Vaughan is just fine with those designations.

“I tell my officers and my jail staff that it doesn’t matter what time it is, they can call,” Sheriff Vaughan said. “It’s part of the job. I knew it when I took the job and it doesn’t bother me at all.

“That wonderful wife of mine (Gail) knows it too and it doesn’t bother her,” he continued. “Having a wife and family that accepts what you do and supports you makes it much easier. Having a good family and a good staff makes my job immensely better.”

Sheriff Vaughan said there was no normal day in his work, but that he tried each day to be officially on duty no later than 8 a.m. although he checks in many days before that time.

“I try to come to the office each day and make sure everything is running smoothly,” he said. “I like to check to see what happened the night before. I usually know everything because I’ve gotten a call, but I like to make sure nothing slipped through.

“I check the court calendar as well to see what courts are going on that day,” he added. “From there, I try to spend some time returning telephone calls, doing email and taking care of general office duties.”

In addition to trying to get all those things accomplished, Sheriff Vaughan said he does his best to see those who come to his office to talk with him.

“The routine changes based on how many people are here to see me,” he said. “I’ve always been the type of sheriff that if someone comes to see me and I’m here, I see them. If I’m not here, I always try to get back with them.”

But it’s that opportunity to talk to people and help them that made the sheriff interested in the job he has held since December of 1997. At that time, he was appointed to replace the retiring Winfred Hardy. The next year, he was elected to the first of his four terms in office.

“My favorite part of this job is dealing with people,” he said.

The sheriff said he kept a calendar of meetings he was to attend, but he didn’t necessarily plan each minute of the day because it was impossible.

After meeting with those who have taken time to see him, Sheriff Vaughan said he makes it his daily routine to check operations, including the jail, and be available to his staff.

He receives regular updates on open cases that allow him to stay informed of where investigations are at any given time.

“The detectives and Chief Deputy (Ronnie Stallings) keep me abreast of what is going on in individual investigations,” Sheriff Vaughan said. “I have great officers as far as keeping me in the loop. It’s something that I have required since the first day I walked into this office.”

Part of that goes back to the late night and early morning telephone calls.

“If something happens that is serious, the officers let me know right then,” he said. “They let me know what is going on and whether or not I need to come out. There are certain things that I want to know no matter what time it is.”

The main job of a sheriff is to protect and serve the citizens of the county and Vaughan said that is always paramount in his mind.

In the interview process, he said he always makes sure the prospective deputies are people that will put the safety of citizens above all else.

He said that while some crimes were inevitable, the sheriff’s office could still be a comfort to victims by keeping them informed during the investigation.

As he thinks back on his more than 14 years as Sheriff, Vaughan said he has many cases that he will never forget. The one that he was most happy to solve, however, is the brutal murder of two sisters outside of Murfreesboro in August of 2006.

“It was such a brutal murder of two elderly women that was just so horrible,” Sheriff Vaughan said. “Whenever you think about it, I think that it could have been your mother, aunt or grandmother that was murdered for no reason at all.

“It’s a case that has really stuck with me,” he said.

As for those cases that are still open, the sheriff said there was one drug investigation that he wants very much to see closed before he leaves office.

“Obviously, you want to solve every case, but this is one that will be beneficial to so many people when we solve it,” he said.

While he is currently in his fourth term, the sheriff still takes pleasure in his work.

“I love my job,” he said. “There’s no doubt that it is dangerous, but it is a chance on a daily basis to help people.”

One of his favorite parts of the job is talking to children.

“I love getting a chance to talk to children and to let them know that law enforcement is here to help you,” he said. “It’s not all about arresting someone and putting them in jail.

“Sometimes, if someone does wrong, you have to do that, but the other side is that you are there to help people,” he continued. “I like going in classrooms and letting children know you can live your whole life without going inside a courtroom except to see how the judicial system works.”

While that is the part of the job he loves, the part he doesn’t is also crucial.

“Probably the most difficult part is arresting people and putting them in jail,” Sheriff Vaughan said. “You have to do it, but it isn’t something you love. I love my job, but that’s not something I love.”

Sheriff Vaughan said he works hard to serve the citizens of Hertford County every day and to do his duty no matter when or where he’s called upon. He said he believed his life philosophy helped that happen.

“My priorities are God, family and the people of Hertford County in that order,” he said. “I believe if I keep those three as my priority, everything else will take care of itself.”