Tiny office is big on service 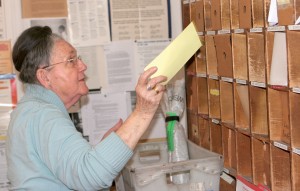 Roduco Postmaster Betty Davis sorts the mail into a portion of the 50 boxes inside the tiny office in this equally tiny Gates County village. Staff Photo by Thadd White

RODUCO – Neither rain nor sleet…nor dark of night has been long viewed as the motto of the United States Postal Service. And while it may not be the official mantra, it is certainly true.

Six days each week, Betty Davis drives the 42 mile trek from her home in Seaboard to the U.S. Post Office at Roduco. There she spends 36 hours each week sorting mail and taking care of the postal patrons of the community.

“You have to come to work,” she said. “You can’t get up in the morning and say ‘I don’t feel like going to work.’ There’s no such thing as that.”

Davis said she reports for work no matter what the weather conditions are, but sometimes counts on her husband to drive her if the roadways are covered with ice or snow.

It has been nearly 20 years since Davis was first assigned to the Roduco Post Office as Officer In Charge before she was named Postmaster at the facility. She has already been a postmaster, although for just a short time.

“I was named Postmaster in Gumberry in 1989 and three months later, the post office burned,” she said. “The owner wasn’t interested in fixing the building, which the post office rented, so it was closed.

“I was a Postmaster without a post office,” she mused.

In October of 1991, the Postmaster at Roduco was promoted to another job and Davis was sent to that office. She has been working there ever since.

Davis didn’t begin working until her youngest son went to college and said that is one of two reasons she continues to work.

“I’m way past retirement age, but I didn’t go to work until later,” she said. “Besides, my husband is a farmer and it’s good security. I’ve always believed as long as you are able to work, you are better off working.”

Each morning, Davis said she gets up about 5:30 a.m. and begins the task of getting ready. While she’s busy preparing for work her husband cooks breakfast and fixes her lunch.

“It takes the whole family to do it,” she said.

Upon arriving at work at 7:30 a.m., Davis begins the routine of the day. The first item of business is to scan (on a handheld scanner) that the packages were picked up the evening before and then she opens the window and prepares for the business transactions of the day.

As soon as the mail comes in, Davis scans that she has received the mail and starts sorting it. When she’s done delivering the items to each of the approximately 50 local postal customers, she has to scan again to record she has finished.

She said all of those technological advances had changed her job over the years.

“When I got the job all we had to do was sort the mail, sell stamps and money orders,” she said. “Now everything is very technical.”

Part of the technical work is the inclusion of a computer, something Davis admitted she wasn’t thrilled about.

“I hated to see them put a computer in here,” she said. “I have learned how to do what I need to on it, but I don’t really enjoy them.”

Of the many things she now does on the computer is paying bills for the Post Office.

What Davis does enjoy is her personal interaction with the customers.

“I enjoy seeing people and talking to them,” she said. “I have time to spend with them. A lot of offices are so busy that customers feel like they’re kind of pushed through.”

Included in that work is sometimes filling out money orders for the customers after selling them.

“Sometimes they don’t want to do them and I don’t mind,” she said. “It’s a service I can provide.”

While she enjoys the work, Davis admitted it wasn’t a constant state of business.

“Some days we don’t sell any money orders at all,” she said. “The first of the month is busier because that is when people are paying bills.”

Davis and other postmasters are also required to scan the inside box and outside box of the post office before they leave each day.

“We have to scan them at the end of the day and if you don’t, they will call you back to do it,” she said. “It’s difficult if you forget, but it is part of my job. There’s no reason to complain or ask to be excused.”

She said the reason was because the post office never closes.

One of the worst days at her job was nearly two years ago when the post office was burglarized.

“I came in and the back door wasn’t right,” Davis said. “I could tell something was wrong and then I put my hand on it and it opened.”

Once inside, Davis found the fax machine was gone and someone had attempted – and failed – to break into the safe.

“That was unpleasant,” she said.

The small post office has been very much a pleasant experience and one Davis hopes will not change soon.

“I don’t have plans to retire, but they are talking about closing 2,000 post offices and that could affect us and I may have to go home,” she said. “People here are against it. They want to have their post office.”

“A lot of people bring mail to the box because they feel safer dropping it in the box than having it in their mail box,” she said. “Most of the people that come in aren’t regular customers, they are folks that just drop by.

“I provide a service and people seem to appreciate it,” she said. “I have time to help them and they tell me that’s important. It’s good to feel like people appreciate what I do.”

WINDSOR – No one trick ponies here. For a team that many feel overachieved for much of their success in 2010-11 Bertie High’s boys... read more