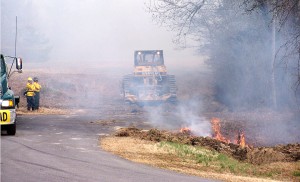 Thanks to extremely dry and windy conditions, the Roanoke-Chowan area is currently prone for a rash of wild fires. Such was the case on Monday in the Brantley’s Grove community of Hertford County where a debris fire quickly got out of control and scorched 44 acres. Shown here is a NC Forest Service plow cutting a line around the fire’s perimeter.

The Roanoke-Chowan area is abnormally dry for this stage of late winter. That fact, coupled with a string of consecutive days of low humidity levels and stiff winds, has kept members of the North Carolina Forest Service and local volunteer firefighters extremely busy.

“Historically our fire season normally begins in mid March,  however over the past three to four years we are seeing some very dangerous conditions beginning in early to mid February,” said Northampton County Forest Ranger Rodney Black, whose office responded to four wildfires last week. “We should expect increased fire danger until we receive rain or until it begins to green up during the spring.”

Hertford County Forest Ranger Michael Hughes is keeping his fingers crossed that some moisture will arrive as early as later today (Thursday). His office has responded to 10 wildfires this month.

“There’s a good chance of some rain Thursday into Friday; we need it, but when the sun comes out and the wind picks up after that it won’t take long to dry out again,” Hughes noted. “It’s been drier than normal. The ten wildfires we’ve had since February 1 is above average for us.”

Hughes, along with his co-workers and members of the Ahoskie Rural and Winton fire departments, had their hands full Monday afternoon in the Brantley’s Grove community. There, a wildfire, caused by debris burning, scorched 44 acres and threatened several homes in a residential subdivision off the Ahoskie-Cofield Road. Hughes said the fire did claim two small structures (outbuildings).

Brian Valentine of Ahoskie was issued a citation in that fire. Hughes said Valentine, who lives on Vann Road, was burning debris on top of an old debris pile when an aerosol can exploded.

“That shot the fire in different directions and, pushed by a fifteen mile-per-hour wind, it got out of control very quickly,” Hughes said.

Another woods fire torched 10 acres on Sunday off the St. John-Millennium Road. Hughes said that blaze was caused by children who had built a camp fire.

“It’s a time of the year when folks like to get outside and clean-up debris that has collected over the winter,” Hughes said. “It’s not against the law to burn that type of debris, but I would advise Hertford County residents not to burn when conditions are unfavorable. By that I mean when it’s extremely windy and dry caused by a long run of sunny days. Either call us (358-3761) to see if it’s okay to burn or contact the Sheriff’s Office or call a volunteer fireman.”

The primary carrier of fire is the forest leaf litter and grass that are now extremely dry.

“Those needing to burn debris should definitely wait until conditions improve,” Black advised. “Anyone burning, with or without a burning permit, will be liable for a fire that escapes their control and requires suppression.  Please use common sense and refrain from burning until we receive rain or when weather conditions improve.”

Meanwhile, wildfires in several areas of the state continue to burn. Preliminary reports show that approximately 59 wildfires burned about 1,254 acres of private or state-owned land in North Carolina on Tuesday. The largest of those blazes (2,030 acres) occurred on Parktown Road in Warren County, approximately five miles south of Warrenton. That fire is now 100 percent contained.

Currently active watches, warnings and advisories, including Red Flag Warnings (where all outdoor burning is banned), are available from the National Weather Service.

I spent this past weekend in Raleigh with friends in town for the Hurricanes and Devils game. They are huge... read more