Priority #1: treat everyone the same 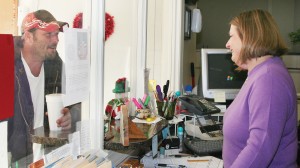 One of the many duties of Woodland Town Clerk Kim Bryant (right) is working with customers who come into the Town Hall. Here she speaks with Bryan Aysque. Staff Photo by Amanda VanDerBroek

On this particular day at the Woodland Town Hall, Bryant is having to be ambidextrous, taking phone calls with one hand and typing away on her computer to check customer water and sewer accounts with the other. There are also residents coming through the front door of the town hall wanting to pay their bill.

This morning is busy for Bryant as a few days ago water cut off notices went out to customers who did not pay their bills. Bryant, a Woodland area resident herself, is acting as a liaison between the customer and Public Works Director Robbie Collier, who turns on the water once the reconnection fee and the bill are paid.

It’s a situation that could turn a customer hostile, but Bryant is armed with one mindset: kill them with kindness.

“My philosophy is that I treat people how I want to be treated and I really don’t have that much hostility when they come in here, because generally they just haven’t paid their bill,” she said about water customers. “I wish I could give allowances, but I don’t. I’m real firm with that because I learned a long time ago that if you give an inch people will take a mile, and you have to be fair to everybody.”

Bryant is familiar with wearing multiple hats, but she’s adamant that she is still learning what the role of town clerk entails.

She clearly remembers the day she started working for the Town of Woodland. The date was March 30, 2009 and two days before Bryant started she was saying goodbye to a job she held for 28 years.

“I worked in the corporate world for 28 years,” she said. “I worked at Georgia Pacific in Conway, the Chemical Division.”

At GP, Bryant said she wore multiple hats, many of them related to office administration duties. She started at the plant as a receptionist and worked her way up.

However, something had changed in those 28 years she worked at GP and it got to the point where Bryant desperately needed a change.

“It was one of those places where it wasn’t what it used to be; things were changing, management was changing,” she recalled. “I just had a gut feeling that it was time for a change for me.”

The timing seemed to be right when the town clerk position in Woodland became available. Bryant applied on a whim, not even having attended a local government board meeting in her life.

“I said everything happens for a reason and if it’s meant to be it will happen,” she said. “I was interviewed for the job and I got a call and they offered me the job.”

So began Bryant’s crash course in the inner-workings of town government and working for the public sector.

Bryant’s first lesson was that her new job involved much more than she had anticipated and the role was evolving to include more tasks than the town clerk before had to complete.

If there is one that is clear about Bryant is that she’s not afraid of a challenge or learning about how things work.

For small communities such as Woodland, having a town clerk that can multitask is vital as most do not have the financial resources to hire a staff of administrators to oversee different financial aspects of the town.

Bryant’s day often begins around 8:30 a.m. and as for a typical day, she said there is no such thing as different tasks can pop up on her plate at any time.

Bryant makes sure the town’s finances are in order. She pays bills and reconciles accounts for the town in general as well as different departments, including the Volunteer Fire Department as well as EMS. During this time, Bryant is working with a CPA closely on the town’s yearly audit, the second one she’s been through.

In addition to taking payments for Public Works, she also occasionally handles payments for citations handed out by the Police Department.

“It depends on how busy they are with their citations,” she said. “They were on a roll one time.”

Payroll was another new duty Bryant had to tackle.

“I was terrified at first because this is what everyone is here for, but there again is where my software people (Southern Pines) have helped me so much,” she said about the task. “The customer service rep that I talk with the most there is a former clerk. So she knows the ins and outs of everything I’m trying to deal with.”

Bryant also forms the agendas for the Woodland Board of Commissioners meetings that take place each first Thursday evening of the month. The agenda includes regular items like department reports as well as issues that need to be addressed and decided upon by the governing body.

“In order to prepare for the board meeting the commissioners have their packet of information that goes out the day before the meeting, which will include the agenda and monthly financial reports,” she said. “The police department has a report on their monthly stats along with Public Works. I try to include those as well. I try to send as much information ahead of time so that they (the commissioners) will be brought up to speed and they’ll be familiar.”

During the meeting, Bryant takes notes on decisions and factual information that she will form and files as the meeting minutes, a document that town officials and the public can go back to for reference on particular issues.

Bryant admits she’s been lucky with her learning curve as it seems everywhere she looks there has been support.

When she first came on board, Interim Town Clerk Jean Bryant (no relation) was there to help the “green” clerk learn some of her new duties. Jean Bryant is a retired Northampton County Tax Department employee who continues to work part time with the town.

“She continued to stay with me so we could learn this together, so she would be able to know how to help,” she said. “She is just a wonderful person, a good friend and co-worker. She still helps me.”

Bryant said town officials have also been supportive in her learning process.

“What I particularly like over the job I did have is that I don’t have that constant supervision and someone looking over my shoulder all of the time, but on the flip side of that, the commissioners and the mayor are a phone call away and they’re here for me,” she said.

Bryant has also shored up with clerks from across the state during “clerk school.” She said there are multiple benefits going to clerk school with the top being meeting other clerks.

“You can learn so much by talking,” she laughed. “You just pick up on the little tidbits that you can bring back and you meet so many new friends.”

When she’s back at the office away from her fellow clerks, Bryant often turns to an email application call Listserve, which connects her with other clerks who can help her with different questions.

“Everyone was where they needed to be at the right time to help me to keep my sanity so I wouldn’t go crazy,” she said about all the support she has received from various sources.

Bryant said some day she may work toward town clerk certification, but for now she’s still working on that learning curve.

“I really love what I’m doing, I love my job, I love who I’m working with,” she said.

Woodland fireman Johnathon Collier (left) chats with Buck Grant of Murfreesboro, the man he was credited as saving from a... read more