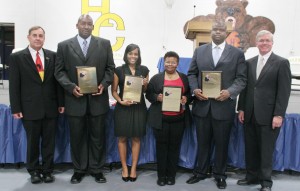 AHOSKIE – It was a night of dreams…one of sharing and believing.

The night’s agenda was filled with music, essay readings, short skits and words of encouragement. It also featured the presentation of the Partners’ Awards, given annually to those who follow in Dr. King’s footsteps to better the communities in which they live.

Joanne Jones, Principal of Hertford County Early College High School, presided over the presentation of the Partners’ Award plaques given to four recipients.

“These partners have engaged in actions that continue to realize the great work of Dr. Martin Luther King Jr.,” Jones said. “These people have worked hard in our community to keep the dream alive.”

“I’m so thankful and grateful for this honor,” Dr. Edwards said. “You all have made me feel so at home here in Hertford County and I love you all for that.”

Jones noted that Dr. Edwards is a pillar of the community, providing free athletic physicals for a number of years, notably for women’s sports teams at Hertford County High School.

The community at-large winner was Hertford County High School Guidance Counselor James G. Futrell Jr. Jones said that Futrell was instrumental in helping the students reach the next level of their life, whether that is attaining higher education at the college level or immediately finding a job. He mentors young men through the BEARS program and is responsible for generating thousands of dollars in grants to benefit HCPS students as well as the community at large.

“I just want to thank the citizens of Hertford County for allowing me to work with your students, it has certainly been a pleasure,” Futrell said.

The HCPS student winner was high school senior Shy’Kiya Lee. Jones called Lee a natural leader, always looking to solve problems without being prompted by others. Lee, President of the Hertford County High School Student Government Association, has been accepted at UNC-Chapel Hill where she plans to study biology and medicine. She was praised for her work with youth at her church as well as for the hours she serves as a volunteer at Roanoke-Chowan Hospital.

“I thank the community, my teachers, my family and the high school for this honor,” Lee said.

Longtime Hertford County High School basketball coach and athletic director Charles Simmons received the “Continuing the Dream” award as the HCPS representative. Jones said Simmons has worked tirelessly in an effort to provide a quality athletic program while promoting good sportsmanship at the high school. Simmons, who just recently reached a milestone by winning his 500th career basketball game as a coach, was also praised for his work as a Director for the NC High School Athletic Association, an organization that has previously honored him for his contributions to prep sports.

“This is a great honor,” Simmons said. “I want to thank the Hertford County Board of Education for giving me the opportunity to work with our student-athletes.”

The event also featured the works of the county’s young people.

Addie Santiago, a third-grade student at Riverview Elementary School, told of the important contributions of Harriett Tubman, famous for her work in freeing slaves through the “underground railroad” – before, during and after the Civil War.

Another Riverview student, fourth-grader Mason Lanier, told the story of Matthew Henson, an African American explorer and associate of Robert Peary during various expeditions, the most famous coming in 1909 which claimed to be the first to reach the North Pole.

Cynthia Ortiz-Monteon, a fifth-grade student at Riverview, presented the life and times of Marian Anderson, an important figure in the struggle for black artists to overcome racial prejudice in the United States during the mid 20th century.

Briana Hardy, a sixth-grade student at Riverview, presented the life and contributions of her step-father, Laron Smallwood.

Jazzmine Bunch, a sixth-grader at Ahoskie Elementary School, gave a stirring rendition, complete with her own spin, of Dr. Martin Luther King’s famous “I have a dream” speech, one originally delivered on August 28, 1963 from the steps of the Lincoln Memorial in Washington, DC.

“Our kids in Hertford County…they’re the best in the world,” said David Shields, Chairman of the Hertford County Board of Education. “I’m always so proud of them.”

Shields continued, “This event is something we always need to do, to remember the legacy of a great man. Dr. King said it best when he made us all realize that everyone deserves the same opportunities, have the same chance. We never need to forget the words of Dr. King…we are all created equal.”

Abbey Askew gave the purpose of the annual event, that being the opportunity to celebrate the life and legacy of one of America’s greatest orators, Dr. Martin Luther King, and to hear from some of the best and brightest students enrolled in HCPS.

As part of Thursday night’s event, five HCPS students presented self-written essays….the topic was “African Americans I most admire.” In order, Morgan Chadwick of Bearfield Primary School paid honor to her mother, a breast cancer survivor; Keara Huguley and Dominic Smith, both students at Ahoskie Elementary School, respectively told of their admiration for an uncle (a veteran of the U.S. Air Force) and a grandfather (who served his country during the Vietnam War); Jerrell Sessoms of Hertford County High School praise the “matriarch” of his family, his great grandmother who overcame decades of discrimination and segregation, and Early College High School student Blake Monger spoke fondly of his grandmother, the first female to serve as Chief Magistrate in Hertford County.

“I am very honored and humbled by the talent we have in our young people of Hertford County,” said HCPS Superintendent Dr. John Fahey who closed the program with remarks.

“Like Dr. King, I will share my dream…I dream that our students will pass all the tests they face in life…that of citizenship, athletics and academics,” Dr. Fahey noted. “But most of all I dream that one day my job as superintendent will be filled by a young man or young woman who was educated right here in Hertford County…a student who grew up in Hertford County, went off to college and came back home to lead.”

Parents and stakeholders of Northampton County Public Schools discuss a proposed consolidation of the county’s two high schools during a... read more