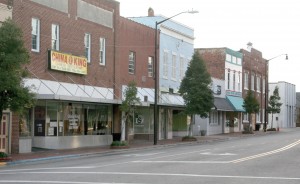 Windsor Mayor Jimmy Hoggard voiced his concern last week over the number of vacant buildings in the downtown business district, naming himself and other town officials to a committee to come up with a solution of how to fill these empty storefronts. Staff Photo by Thadd White

WINDSOR – Windsor officials have decided to take a proactive stance on revitalization.

During their regular meeting last Thursday, the Windsor Board of Commissioners agreed to work actively to make downtown a site that is viable for businesses.

Windsor Mayor Jimmy Hoggard said he had spent quite a bit of time thinking about the solutions to a downtown that has too many empty buildings.

“We’re really hurting for retail sales and there are too many buildings empty downtown,” he said. “I want to appoint a committee that will consist of Commissioner Hoyt Cooper, Commissioner Joe Alexander, the Administrator (Allen Castelloe) and myself to study this and come back with recommendations.

“We really need to work at it and work on having retail sales in the downtown area,” he added.

Alexander chimed in, “If we provide retail opportunities, it will also mean more jobs in Windsor.”

Commissioner Bob Brown said it was important to work on the goal, but was concerned about the two floods over the past 11 years.

“Ya’ll have a job to do, though, because anything you do, people are going to be worried about flooding,” he said.

Mayor Hoggard said that was true, but that there were a lot of empty buildings in the downtown area before either flood occurred.

Commissioner Collins Cooper said there was another huge obstacle.

“We do have some businesses that would like to come downtown,” said Cooper, who also leads the Windsor-Bertie County Chamber of Commerce. “The problem is that some owners downtown think their property is worth more than it is.

“Others can’t or won’t fix up the buildings,” he added. “That’s hurting us too. We have some people that would buy buildings, if people would take a little less. We need to work with them to.”

Brown said that was a tough situation.

“It’s tough to try to ask someone to take less than they think their property is worth,” he said.

Hoggard said that would be part of what the committee would be studying.

“One of the possibilities is that we somehow buy some of these buildings and refurbish them ourselves,” he said. “We are not going to get grants and free money to do this. We’re going to have to figure out how to do it ourselves.

“If we receive some grants, that would be beneficial, but it’s on us to make the downtown better for our citizens,” he said. “The Chamber has done a good job of getting people here, but we need to be more proactive.”

The committee will begin working immediately and will report back to the board when they have concrete ideas and solutions.

REPUBLICAN – Fire has destroyed two acres and some personal property today near this Bertie County community. According to Bertie... read more