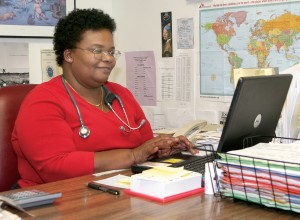 Dr. Beverly Edwards enjoys a little downtime at the end of her busy day browsing the Internet in the comfort of her clinic office. Staff Photo by Amanda VanDerBroek

AHOSKIE – Flu, cold, strep throat, ear infections are all sicknesses most people rather distance themselves from.

But for Dr. Beverly Edwards, from January until February diagnosing and curing those illnesses is an ordinary day at Ahoskie Pediatrics. It’s the height of flu season; a time Edwards wishes her young patients weren’t in classrooms passing germs around like play blocks or teenage gossip notes.

“That’s why I’m in favor of closing schools for January and then let the kids go in the summer,” she quipped. “Of course, they (the patients) don’t like that idea.”

On one particular Monday, Edward’s office is filled with young patients from those with the seasonal bugs to those there for a regular check up.

On this day, Edwards and her staff are also proctoring two medical students who see patients themselves and then report back. On top of that, two children need breathing treatments to relieve congested airways.

At this point, Edwards said she’s having to multitask and prioritize patients from the most severe to the moderately sick.

“There were a couple people that got upset, but when their child is sick you have to take that time with them,” she said.

There’s no doubt you’ve heard of Dr. Beverly Edwards, and if you’re lucky you’ve met the veteran doctor. Her bubbly, outgoing personality is infectious, something that comes in handy with the children and adolescents she cares for.

Since 1991, Edwards has owned and operated Ahoskie Pediatrics. At first glance, the Raleigh native’s path to becoming a medical doctor can be perceived as unconventional, but none the less she has been successful.

From an early age, Edwards said she was going to be a doctor. She was initially inspired by fictional television doctors like Ben Casey and Dr. Kildare, but there was one problem.

“I thought I couldn’t do it because I couldn’t stand the sight of blood,” she said. “But I found out it was my own blood I couldn’t stand, anybody else’s it was okay. I still don’t do well with shots and things like that, but I try to be brave.”

In high school, Edwards’ life took an unexpected turn when she became pregnant in her junior year. It’s a life lesson she shares to this day with her young patients as well as her two younger children and their friends.

“I talk to my teenagers—girls and boys both—I’m very frank about what that experience was like,” she said. “I don’t try to sugar coat it.”

Edwards said she tries not to judge when her patients are in the same situation, but at the same time she tries to drive that strong message home.

“It will change their lives in ways that they never imagine. You have to be able to take care of a child,” she said. “When you make a decision to have a baby, you have to have a 20 year plan. If you don’t have an education yourself, or a job you can’t make a plan at all. It’s not an easy thing, think about the long term, think about what you want this child to be.”

Her teenage pregnancy resulted in Edwards marrying at an early age and her parents, Joseph and Emma, giving her a crash course in reality.

“When I got pregnant in high school, of course my parents were mad. They supported me, but didn’t take over,” she said. “I had to do things myself—if I wanted them to keep my son—I had to pay them. It wasn’t anything major, but it was like, this is the way the world works.”

She continued, “When I look back now, I couldn’t have been given any better parents than them. They made what could have been a really traumatic situation better.”

The life lessons from her parents didn’t end there. Edwards’ father, a music teacher, and her mother, a voracious reader, were wholehearted about education, especially when it came to their seven children.

Edwards finished high school and began college at NC State University, however, she dropped out in the middle of her sophomore year while she was going through a divorce.

She later enrolled at Wake Tech (now Wake Community College) where she received certification as a lab assistant and began work at a local hospital.

Edwards eventually made a return to NC State, taking night classes. It’s there she encountered a persistent chemistry professor who pushed her to pursue medical school.

“Every time he saw me, ‘Ok what are you doing about it, are you going to medical school?’” she recalled.

Even after she moved on from the professor’s course, he encouraged his colleagues to persuade the young Edwards into medical school.

“From then on everybody that came in my way just helped me,” she said.

Originally, Edwards had an interest in being a family practice doctor, something largely inspired by ECU, but during her time as a lab assistant she was a phlebotomist for the nursery in pediatrics.

In medical school, Edwards started caring for adults, but found the patients didn’t always do what they were told nor take their medicine all the time and had a tendency to “whine.”

“Most people go out of their way to take care of their kids, for the most part you’re seeing them in healthy situations for check ups. You hardly see a child with multiple illnesses,” she said about younger patients. “Generally it’s straight forward. It’s just fun.”

At her practice working with children and adolescents, Edwards has been able to mix her love of reading and work. Her clinic is involved with a national reading program, Reach Out and Read, which gives a book to children six months through six years at each check-up. Money from office’s coffers is used for the program and Scholastic matches those funds as well.

“That’s an icebreaker,” she said. “Also it reinforces the need for literacy and encouraging the parents (to read to them).”

It was during a summer program, just before Edwards started her residency at Medical College in Virginia in Richmond, Va., that she first heard of a small town called Ahoskie, where a couple of her classmates hailed from.

“I had never heard of Ahoskie before, so that was my connection,” she said. “That kind of set the way.”

After her residency, the new doctor thought she had a job lined up in Scotland Neck, a perfect situation since her new husband, Larry, had a job at Southeast Halifax High School.

“When I went to Richmond, it was the oddest thing, I did my residency there and Dr. Faiqa Qureshi, the doctor who used to have (Ahoskie Pediatrics), had done her residences at MCV. So when she was looking to go back into practice she called MCV,” she said.

The medical college gave Dr. Qureshi a number to a friend of Edwards. As happenstance would have it, it was the same friend Edwards was visiting and expressing her disappointment about a job she thought she had.

“My friend gave me the phone and said, ‘This is the person you need to talk to’,” Edwards remembered. “So I talked with Faiqa, and I ended up buying the practice. It was just God’s gift that I happened to be sitting there in her office crying about how I didn’t have a job and she gets the phone call from Faiqa.”

Acquiring Ahoskie Pediatrics, Edwards set off practicing medicine and bonding with her staff. Many of the original employees still work in the medical office and along the way new faces have been added.

“I think we have a pretty tight family here,” she said about her staff.

Edwards said her days now at Ahoskie Pediatrics are more routine now. In the days when she provided hospital coverage, her schedule was more unpredictable.

Typically, the first hour of Edwards’ day is filled with paperwork, including insurance forms, lab forms and x-rays. The office is currently in the process of switching to electronic medical records.

Then, Edwards checks in with the day’s patients and tries to schedule those children in who have suddenly become ill.

“So your day is still a little unpredictable,” she said. “There are the days that you get a sick (patient) and you have to call 911. So we get a little bit of emergency stuff.”

“She is a jewel. She’s been here 16 years,” said Edwards. “She treats the practice and the finances like it’s hers. She really takes care of it.”

During the lunch hour, Edwards and her staff typically call parents, contact other doctors and write referrals.

In 2009, Edwards watch her first batch of newborns cross the graduation stage and into adulthood.

“That was amazing that I got to see that,” she said.

As for her role as a pediatrician, Edwards said her journey as been well worth it.

“I couldn’t see doing anything else, except maybe being a librarian,” she smiled.

EMTs stand between life and death

Colerain EMS Emergency Medical Technician Travis Jackson and those who serve like him must be prepared at all times when... read more