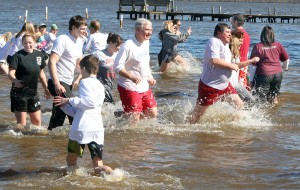 In excess of 100 individuals (some shown here) braved the cold waters of the Chowan River on Saturday to take part in the “Polar Plunge” - a fundraiser for Hertford County Special Olympics. Staff Photo by Amanda VanDerBroek

On Saturday, Hertford County Special Olympics held its inaugural Polar Plunge “Freezin’ for a Reason” at Tuscarora Beach in front of Riverside Restaurant.

According to Polar Plunge Coordinator Lauri Heckler, the event saw 10 teams of approximately 140 people brave the icy cold water of the Chowan River all in an effort to raise money for Hertford County Special Olympics, which provides year-round sports training and athletic competitions for children and adults living with intellectual disabilities. The minimum donation was $35 to take the plunge and earn a long sleeved event shirt.

Though air temperature highs were in the 50s, the water temperature in the Chowan was a brisk 47 degrees. Participants were encouraged only “plunge” to their waists, but some chose to dive deeper. Two warming tents were on hand for those with thin skin.

“I got involved because it was a good cause,” she said.

Wilson, a middle school English teacher at Ahoskie Christian School, said the cold water stung her skin, but the experience was “exhilarating and exciting.”

Hertford County High School College Advisor Eric Smith said the reason he participated was for the cause.

Smith said the frosty cold water wasn’t as bad as he expected.

“It only hurt for a few seconds,” he said. “On the way in I didn’t feel it, but I definitely could feel it on the way out.”

After he took the “plunge,” Smith made a beeline to warm up.

Organizers said they were happy with the number of participants at the first Polar Plunge.

“It’s very thrilling,” said Heckler about the high participation rate. “All of the money (we received) is earmarked for Hertford County Special Olympics.”

Heckler said the goal for the group is to sign up 41 more athletes by November.

According to organizers, Hertford County Special Olympics has been around for the past 25 years, but went inactive a couple of years ago.

This time around those involved with the operation of the group hope to put Hertford County back on the regional, state, national and international map.

In addition to Special Olympics up and running again in Hertford County, the group also plans to spread the message of open-mindedness.

Heckler said two area schools, Hertford County High School and Early College, are leading an endeavor to stop using the “R-word” and promote acceptance of those with differences.

She added that Hertford County Special Olympics plans to have another Polar Plunge next year and explained the importance of having the fundraiser.

“It gives people with intellectual disabilities a chance to participate in things the rest of us take for granted,” said Heckler. “It’s a chance for them to have a physical outlet and it’s of no cost to them; that’s why things like this are so important.”

WINTON – One month removed from the deadline to pay real property taxes in Hertford County, there remains in excess... read more