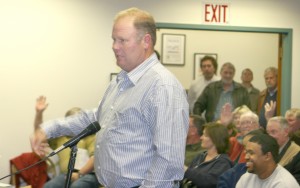 Kent Williams (left) of Powellsville was one of several Bertie County citizens to voice their opinion of a $43,000 raise given to Bertie County Manager Zee Lamb. A standing-room only crowd attended Monday night’s meeting of the Bertie County Board of Commissioners. Staff Photo by Thadd White

WINDSOR – More than 50 people gathered here Monday night to express concerns about a salary increase given to the Bertie County Manager.

Four people spoke in each of two public comment sections provided by the Bertie County Commissioners. Six of those to oppose the salary increase, one to ask for more monetary support for firefighters and one to express concern about the impasse between the board and citizens.

According to information from the North Carolina Institute of Government, the salary of Bertie County Manager Zee Lamb was increased from $101,725 in 2010 to $144,000 in 2011.  That $42,275 increase was the subject of discussion amongst those who spoke at the public comment section.

“I am here to talk about the outrageous salary increase received by the county manager,” Terry said.

He indicated the salary did not compare with managers in the same economic situations as Bertie County and asked for a justification for the salary increase.

He also called for an investigation by the Attorney General into the salary increase.

“I’ve known Zee for quite a while and I believe I know what he is doing,” Phelps said.

He then read a statement made at a previous commissioners’ meeting by Bertie County Commission Chairman L.C. Hoggard III concerning a request for salary increases by the Bertie County Board of Education.

Hoggard’s statement opposed a raise for members of the school board based on the tough economic times.

“All I’m asking is that you practice what you preach,” Phelps concluded.

The next to speak was Kent Williams of Powellsville who said he heard about the salary increase while visiting a store.

“This don’t look good to nobody,” he said.

The final person to speak in the first public comment section was Ron Wesson. Wesson said he also wanted to discuss the salary increase.

“I understand the board thinks he has done a good job, but when the salary increases that much, it doesn’t make sense,” Wesson said.

Wesson also said Lamb now made more than the Governor of North Carolina, the state attorney general and the Chief Justice of the North Carolina Supreme Court.

Following the speakers, Chairman Hoggard said the board had heard from the citizens.

“Thank you for your comments,” he said. “They will be taken under advisement.”

The board always allows public comments at the end of the agenda as well and four additional people took time to discuss the matter at that time.

Fin Rascoe said he knew the board said they would take it under advisement, but asked for them to discuss the matter.

“Why not talk to us about it,” Rascoe said. “It is an astronomical number. Can you give us an idea of why.”

Hoggard then reiterated his statement that the board would take the matter under advisement.

The next to speak was David Jennette of Windsor, who said he wanted to make it clear he wasn’t speaking about Lamb personally, but about the position of county manager.

“For you guys to give a 42 percent raise for one position is appalling,” he said. “I don’t care why.

“Unless the county manager can lay golden eggs and recoup that money, this is the wrong answer at the wrong time to the wrong public,” he closed.

Wood Perry then took the time to talk about the salary increase as opposed to the amount of money spent on the county firefighters.

“I ask that you reexamine your priorities when budget time comes,” Perry said.

He said many other counties give more to firefighters then Bertie County does and the county should do more.

“Firemen are expected to answer calls night and day and then raise the money to keep the fire department running,” Perry said. “The firemen are not here for firefighters, but for the citizens.”

He said the county had not increased the $10,000 given to each department in 15 years.

The final person to speak was David Waters of Windsor, who said he recently moved back to town.

He said he understood that Lamb was an attorney and deserved to be paid well, but was concerned about the fact so many citizens were upset.

“I hate it for ya’ll as elected officials,” he said. “I just want us all to get along.”

Lamb’s salary is higher than any of the four county managers in the region. Hertford County Manager Loria D. Williams is paid $94,961 while Northampton County Manager Wayne Jenkins is slightly behind at $92,795. Gates County Manager Toby Chappell makes $80,508 annually.

Second arrest made in Bertie murder

WINDSOR – A second arrest has been made here in the death of a Martin County man. Bertie County Sheriff... read more