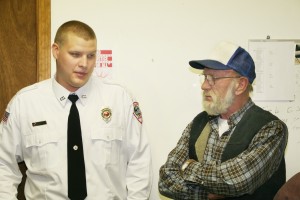 Woodland fireman Johnathon Collier (left) chats with Buck Grant of Murfreesboro, the man he was credited as saving from a burning vehicle on Jan. 14 in Jackson. Collier was honored for heroism Saturday morning during a ceremony held at the Woodland Fire Department.

WOODLAND – Three minutes…that was all standing between Buck Grant and certain death during the early morning hours of Friday, January 14.

Trapped inside his burning vehicle, the Murfreesboro man was in dire straits – he needed help and fast. Flames were coming from underneath the dashboard of his 1997 Chevrolet Lumina; smoke was filling the vehicle’s interior….Grant was mere moments away from meeting his maker.

On his way to work that winter morning was 22-year-old Johnathon Collier of Woodland, a member of that town’s fire department. For reasons unknown, Collier was ahead of his normal schedule, passing through Jackson at precisely 6:27 a.m. instead of the typical 6:30 en route to West Fraser, Inc., a sawmill located near Seaboard where he has been employed for the past five years. He is required to be at work at 7 a.m.

As he turned off US 158 onto NC 305 in downtown Jackson, Collier noticed what appeared to be smoke coming from a vehicle parked on the edge of the street. He initially thought it to be a case of a car overheating, but soon discovered it was much more than a simple mechanical problem.

“When I got along beside the car I could see flames coming from underneath the dashboard,” said Collier as he nervously stood before a large crowd gathered Saturday morning at the Woodland Fire Department where the young man was honored for heroism by the Northampton County Firefighters Association (NCFA).

“Not knowing anybody was in the car I called it in (notifying the Northampton County 9-1-1 Dispatch Center),” Collier continued. “I went to the car and beat on the window, calling out to see if anyone was inside; I didn’t hear anybody answer.”

Collier said he then went back to his truck to move it away from the burning vehicle. Upon returning to the car, Collier said he called out twice more in an effort to solicit a response from anyone possibly inside the vehicle. It was on the second request that he finally heard a plea for help.

“He was kicking and yelling,” Collier noted. “By that time the car was pretty much gone so there wasn’t time to go back to my truck to get a hammer or something to knock out a window. I used my steel toed (work) boots to knock out the front passenger window and I pulled him out.”

“All I can say is that he saved my life,” said Grant who also attended Saturday’s ceremony and joined others in saluting Collier’s brave actions.

That salute included the presentation of a plaque to Collier by NCFA President Ed Porter, Chief of the Gaston Fire Department. The plaque read, “For your act of heroism on January 14, 2011 your willingness to risk your safety and life to save another is what the volunteer fire service is all about and we commend you for your devotion and duty to your fellow man.”

Grant said he was on the way to Pleasant Hill that morning from his home in Murfreesboro.

“Most of the time I take the back roads to get to Pleasant Hill,” Grant said. “Something just told me that morning that I had plenty of time, so just go on through Jackson. Boy, I’m glad I did. If I had been on a back road there’s no telling how long it would have took to find me.”

Grant recalled as he was first entering Jackson’s town limits that morning he noticed a little smoke coming from around the dashboard.

“I just figured a heater hose had busted,” Grant said. “By the time I pulled over flames we coming from everywhere. I tried to open the driver’s side door and that didn’t open, burning my hand in the process. Then I scooted over to the passenger’s side and that (door) wouldn’t open. I figured then I would kick my way out, but that didn’t work.”

“All I could see at that point was his shoe soles kicking at the window,” Collier remembered. “He was kicking from the inside and I was going at it from the outside and neither one of us was having any luck. I almost got to the point where I was going to use my fist to try and bust out the window, but after about the tenth time of using my shoe, the window finally broke and I was able to get him out. I just acted on gut instinct, there wasn’t time to do anything else at that point.”

Collier said he didn’t realize until after the ordeal was over that the steel cup located in the toe area of his shoe had moved up to around the bottom row of the shoelaces.

As far as Grant being unable to open the doors to his car, it’s believed that due to the fire the wires controlling the automatic door locks had melted.

Grant suffered burns to his hands and the top of his head.

“I want to thank everyone for coming out in this wet weather to honor one of our own, Johnathon Collier, for the fine job he did in saving Mr. Grant life,” said Woodland Fire Chief Cleve Bowen.

Bowen remarked that this month marks Collier’s fourth year as a Woodland firefighter. He added that Johnathon comes from a long line of volunteer firemen….his grandfather, Perry Collier Sr., just retired from the WFD; his father, Robbie Collier, serves as Captain of the department; and his uncle, Perry Lee Collier Jr., is one of WFD’s Lieutenants.

Chief Bowen connected Johnathon Collier’s act of bravery to the creed which all firefighters live by – the “Fireman’s Prayer.”

“Give me concern for others, let me seek out those in need,” Bowen read from the prayer. “Well, Johnathon certainly demonstrated that that morning; he realized there was a problem and stopped to help, unlike others than we’ve been told drove on by that morning.

“Give me courage, the boldness of spirit in the face of constant fear, to share and endure the ordeal of the one who needs me,” Bowen continued reading from the prayer. “There again, Johnathon has this and demonstrated this fully on that morning.

Bowen continued to read from the prayer, “Give me the wisdom to lead, the passion to comfort and the love to serve unselfishly. Johnathon did that; once he got the man out of the vehicle, he escorted him to his vehicle, out of harm’s way, and stayed by his side until the (Jackson) fire department and (Northampton) EMS personnel arrived.”

Robbie Collier also took part in Saturday’s ceremony, speaking both as the WFD Captain and as a proud father.

“I appreciate everyone coming out this morning, it means a whole lot to me and my family and to my son,” he stated. “Johnathon would be the first one to tell you that we’re making too big of a deal out of nothing. Mr. Grant has a different opinion of that because we all know that the Lord put Johnathon in the right place at the right time that morning.”

The father said his son does not like the spotlight, rather just simply, “doing what it takes when the job is needed.”

“We’re not making a big deal over nothing,” Robbie Collier continued. “Saving a life is a big deal.”

He backed up that fact by reading a passage from the Bible (John 15, verses 12-13)…“I command you to love each other in the same way I love you. And here’s how to measure it, the greatest love is shown when people lay down their lives for their friend. That’s what Johnathon did that day and I feel certain that he’d do it again. And it’s not just firemen, it’s police, it’s EMS, it’s the military, we all go out and put our lives on the line every day.”

Bre’ Ana Powell of Woodland places a rock on the Ashe Street memorial to her great aunt, Phyllis Powell, who... read more