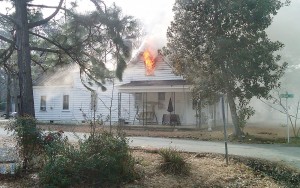 According to Rich Square Fire Chief Johnathan Morris, the department received a call about a house fire located at 201 Stanford Street at approximately 3:02 p.m.

“Flames were coming through the roof,” Morris said about the condition of the home when crews arrived.

The crews were able to put the fire out quickly as units with the Rich Square Fire Department checked back into the station shortly after 5 p.m.

Morris said there were no injuries reported and the homeowners were not at home at the time of the fire. There was no word on how many people resided inside the home.

As for the cause, Morris said fire personnel “had some ideas” as to what caused the blaze. He did not elaborate on the suspected cause and said the homeowner’s insurance company would be in charge of the investigation.

Morris believes the home itself will be salvageable as the flames were mainly contained to the upstairs attic area.

“The back half of the home was saved, it was really the attic and roof area that was damaged (by the fire),” he said.