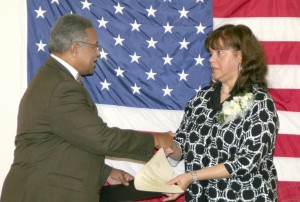 AHOSKIE – Tears streaming down her face one minute and laughing uncontrollably the next – Evelyn Howard’s emotions were very visible here Monday night.

In a fitting tribute to her 30 years of service to the Town of Ahoskie, Howard was the center of attention, as well as a lot of love and light-hearted moments, at her retirement party held at the Mixed Grill on U.S. 13 South.

A room full of family, co-workers and friends bid a fond farewell to a woman who has served the town in a number of capacities over the years. She was initially hired as an Office Clerk at Town Hall on Jan. 7, 1982. Her hard work was later rewarded as she was first promoted to Deputy Town Clerk and Deputy Finance Officer in September of 1997; Town Clerk and Chief Finance Officer in April of 1998; and Assistant Town Manager, while still maintaining the roles of Town Clerk and Chief Finance Officer, from January 2005 until her retirement (Jan. 31, 2011). She also served as Interim Town Manager from October 2004 until January 2005.

“You all mean so much to me,” Howard said. “I love this town, one that has been very good to me. I feel I have given it one hundred and ten percent and I leave with no regrets. I’ve enjoyed my time and I will miss you. If I could use only one word to describe this night it would be blessed. I am blessed to have my family, my friends, my co-workers, past and present, here tonight. I love you all.”

“I don’t think I ever passed Town Hall at night, and I’m out at all hours of the night, that Evelyn wasn’t here working, trying to do all these jobs,” Ahoskie Mayor Linda Blackburn said. “She always had the best interest at heart for the citizens of our town and for the town’s employees.”

Blackburn continued, “I’ve always admired Evelyn’s dedication and I will miss here. She has earned her retirement and I extend to her my best wishes as she now gets to enjoy quality time with her husband and her family, including those precious grandchildren.”

District 4 State Senator Ed Jones took time from his busy schedule in Raleigh to personally congratulate Howard on her 30 years of public service. He presented Howard a Senate Resolution, but the best was yet to come.

In tribute to her many years of serving the citizens of Ahoskie, Jones, on behalf of Governor Bev Perdue, presented Howard with the prestigious Order of the Long Leaf Pine, the highest honor a citizen of the Tar Heel State can receive.

District 5 NC House of Representative Annie Mobley was unable to attend the retirement party, but sent a note of congratulations to Howard.

Each member of Ahoskie’s Town Council expressed their sentiments for their colleague.

“Even though I’ve only worked with Mrs. Howard for just one year, I’ve known her for quite a while,” Councilman Winfred Hardy said. “While you’ll be missed, I’m glad that you are retiring on your own; by that I mean you didn’t have to do it health wise. You are able to now do some of the things you’ve always wanted to do.”

“I really appreciate everything you’ve done for me,” said Councilman Maurice Vann. “You made things easy for me. I wish you many happy years in retirement.”

“Thirty years is a long time and you are so deserving of your years ahead in retirement,” Councilman Malcolm Copeland stated.

“You made things so much easier for me when I first came on the Council and I’ve thoroughly enjoyed our time together over the last 10 years,” Councilwoman Elaine Myers said. “I know you respected us as council members, but we respected you as well. I hope you enjoy your good health and retirement for many years to come.”

“Are you sure you haven’t changed your mind,” jokingly asked the Ahoskie Council’s senior member, O.S. “Buck” Suiter Jr. “I can’t think of anybody who has meant more to the citizens and employees of the town of Ahoskie since 1982. She always gave one hundred percent to make our town a better place to live. I’ve enjoyed working with Evelyn and I will miss her so much.”

As tokens of their appreciation, several department heads of the town government presented Howard with special gifts. Public Works Director Kirk Rogers gave Howard her “Parking Only for Town Clerk” sign that once stood in the back parking lot of Town Hall. Her office staff – Patricia Bradley, Henrietta Vinson and Lori Harrell – presented a framed copy of the invitations to the retirement party as well as the preceding reception held in Howard’s honor conducted at the Ahoskie Chamber of Commerce.

“We all want to say how much we love you, how much we’ll miss you and how much we appreciate all you’ve done for us,” said Bradley.

Town Manager Tony Hammond handed Howard a framed copy of the front page of the Thursday, Dec. 30, 2010 edition of the Roanoke-Chowan News-Herald, one containing a story on Howard’s final audit report where the town received a clean bill of financial health.

She also received from the town’s department heads and council members an engraved piece of crystal containing a heartfelt sentiment and Ahoskie’s official seal.

Others in the audience extended congratulations on a job well done by Howard.

“On behalf of the Hertford County Commissioners, thank you for your service; we’re so proud of what you’ve done for the town and the county and wish you well in retirement,” said Board Chairman Johnnie Ray Farmer.

“Evelyn is like a tree that was planted 30 years ago,” said Hertford County Commissioner Ronald Gatling who previously served 12 years as an Ahoskie Town Councilman. “With a tree, the root will run until it finds a rock and will wrap around that rock so the tree becomes steady. Evelyn has been that rock for the Town of Ahoskie for 30 years. If you needed to know something, you asked Evelyn. She knew the town; she knew the system….we leaned and depended on her knowledge.”

“In my six years on the town council I could easily see the passion and dedication that Evelyn brought to work each and every day,” said Doug Brinkley, now a Hertford County Magistrate. “I learned so much being around her.”

“Congratulations on your 30 years of service and on your retirement,” Ahoskie Police Chief Troy Fitzhugh remarked. “I enjoyed working with you and I appreciate all you did for me and my department.”

“Thank-you for being a good co-worker, but I thank you more for being a good friend,” said former Ahoskie Recreation Director Dennis Everett who retired last year after 30 years of service to the town.

“I guess in life we’ve all said if we could do something different or if we could change something in our lives we would,” said Howard’s daughter, Earnika. “But I can honestly say that if I had a chance to re-live my life again I would want the same mom. You have truly been a blessing in my life and I love you.”

“You’ve made our job so much easier when we’ve been down in the trenches with you working out all the intricate funding details of projects the town was investing in,” stated Dan Boone of the Wooten Company, Ahoskie’s engineering firm. “She is like the rock that Mr. Gatling just referred to. We appreciate the relationship we’ve had with you.”

“It was a pleasure spending 15 years with you and I wish you good luck and God speed in your well deserved retirement,” said former Ahoskie Town Manager Russell Overman.

“I only worked with Evelyn for three years, but in that short period of time I was able to discover her most outstanding attribute – character,” said former Town Hall employee Sue Caton, now living in Maryland. “I learned to depend on her and I love her like a sister. Working with her was a pleasure.”

“I enjoyed working with Evelyn so much,” said now retired Ahoskie Public Works Director Bryan Lewis. “I’ve only got one word of advice for her husband, Earnest, you better hold on tight to your money because she’s tight with a dollar.”

“We worked together for 21 years and it was quite enjoyable, despite her always giving me my expenditure statements marked in red ink,” said Stewart White, Superintendent of the town’s wastewater treatment plant. “She always looked out for the best interests of the town.”

“I’ve worked in three different towns with three different clerks and I can’t think of a better person to end that with than with you,” said Hammond as he gave his former top assistant a hug. “You kept me straight and I appreciate everything you’ve done.”

Congressman G.K. Butterfield, who represents North Carolina’s First District in the U.S. House of Representatives, also paid tribute to Howard. On Tuesday, January 25, he read Howard’s career accolades on the floor of Congress. Those words became part of that day’s published Congressional Record, a record of the proceedings and debates of the United States Congress while in session. A framed copy of that publication was presented to Howard.