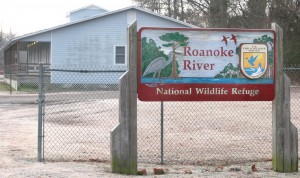 The Roanoke river Center on US 17 Business is among the three options under consideration by the Windsor Board of Commissioners to site a farmer’s market. Staff Photo by Thadd White

WINDSOR – Instead of reaching conclusion, it grew.

Wednesday morning the Windsor Board of Commissioners again discussed the new farmer’s market that will be coming to town, but did not reach a final decision on its location.

Instead, the board heard information about additional sites that would be available for the project.

At its regular meeting earlier this month, the board had narrowed down the options to a parcel near the Cashie River behind the WilcoHess convenience mart and the former CarQuest Building on Granville Street.

Matt Miller of Project H, whose organization is administering the $120,000 grant for the market, said he had additional information for the board to consider.

“I’ve had some discussions with Tom Stroud, the director of the Roanoke River Center and he is interested in having the Farmer’s Market as part of their programming,” Miller said. “The property itself is also interesting in the form of the structure.”

Miller said there was already a community kitchen on the site and there are restrooms available.

He said the other site he would like to discuss is the property that used to house the Purple Lizard on Granville Street, which is owned by the town and is currently being torn down.

“It doesn’t have to be huge,” Miller said of the Farmer’s Market. “A half dozen to eight stalls would certainly fit there.”

Miller did, however, remove the CarQuest building from consideration as far as the Project H board is concerned. He said his board had said they would prefer to have the money spent on new construction.

Miller said the area would draw a greater demographic to the market because of the walking traffic in the area. He added that the river site was “almost too exclusive.”

Hoggard asked if he was talking about the new site at the river.

“Yes,” Miller said. “It would be a great site, but I’m afraid it has an air of exclusivity.”

Commissioner David Overton asked if  the site downtown could be designed to acknowledge the age of the buildings on that street.

“I think there could be a nod to age of the structures, but I don’t think what we’ll design will be brick and mortar,” Miller said.

“My main concern is bringing it downtown,” Overton added.

Mayor Pro-Tempore Hoyt Cooper said he was concerned about the lack of restroom facilities downtown and felt that it could detract from what the board wanted to accomplish in revitalizing the downtown area.

Commissioner Bob Brown said he had looked at the prospective site behind the WilcoHess and believed there was sufficient space and parking there, but Commissioner Joe Alexander disagreed.

“I don’t think there is enough room,” Alexander said. “I think you’re going to have traffic in the Hess parking lot and that could be a problem.”

Miller said he was also concerned that with the lack of restrooms at that site, people would go to the WilcoHess since it was located so close and that it could be a problem for the business.

“I’m torn,” he said. “In terms of architecture, I think we could do something amazing at the River Center. It’s a very attractive fit.”

The mayor said he was concerned that the location of the River Center site, which would be inside the fence and beside one of the existing buildings, would not allow the farmer’s market to be seen.

Cooper said the Farmer’s Market in Raleigh was not in an easily seen area and that he thought billboards would remedy that problem.

Brown asked if the board could choose two locations and see designs for each before making a decision.

Miller said that would be tough on the students who were doing the designs because it was new to them.

Commissioner Collins Cooper asked what happened if there were cutbacks at the River Center.

“Suppose the River Center is a victim of budget cuts,” he asked.

Brown said the property belonged to the town, but that he understood the point his fellow board member was making.

Mayor Hoggard said he believed the town’s contribution was enough to keep the River Center open, though maybe with less staffing.

The board agreed to discuss the matter further and make a decision soon.

After a closed session, Mayor Hoggard said the board had added one additional site to the list of possibilities.

“We are looking at the site at the front of the River Center, which could be more visible,” he said. “We are going to check into that possibility before making a decision.”

The mayor said he expects the board to reach a decision no later than their February 10 meeting.

WINDSOR – Two lingering decisions were made here Wednesday morning. During the reconvened meeting of the Windsor Board of Commissioners,... read more