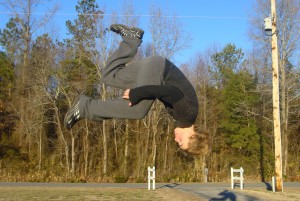 The latest rage among teenage boys has made its way to Gates County and is making quite the impact.

Parkour, (or as it is also commonly referred to, free-running) from the French word meaning the sport or activity of running through urban areas while performing various gymnastic maneuvers over or on man-made obstacles such as walls and buildings, is, at its most basic level, a unique form of gymnastics in which the athlete artistically uses the body to travel.

“I like parkour because of the fact that you create your own unique way to do it. No two people’s styles of parkour are the same. And it’s a great way to push the limits of your mind and body and a great way to stay in shape and the fact that there are no rules to it,” explained Gates County High sophomore David Kinard.

Kinard is only one of several students at the school who are dedicated followers of the sport, though their reasons for practicing this form of gymnastics varies.

Wes Funk, sophomore, points out that he is drawn because, “It’s a physical activity that gets rid of fears to do things.”

These students share a common frustrations: not having a place to practice their talent without fear of punishment.

The sport, while like most, can be dangerous, requiring incredible athleticism, as well as precision, balance, strength, and body control. Although anyone capable of successfully participating in the brand of gymnastics is worthy of a pat on the back, it is more frequently leading to a slap on the wrist.

Since last school year, numerous Gates County High School students have been disciplined in the form of ISS, suspension and expulsion for showing-off their parkour skills on school property.

“I went to school one day, went outside and started flipping and they told me I had three days ISS. I was mad because I was never told I couldn’t before that,” explained junior Mac Johnston.

Funk describes a similar experience: “I’ve been yelled at and followed by teachers around the school.”

Kinard, after being suspended numerous times last school year, was finally expelled. This year, he has already received ten days of OSS (out-of-school suspension) for flipping.

While there is no specific guideline in the student handbook prohibiting activities involved with parkour, such as flipping, tumbling, etc., the students are well aware that they are not to do these activities on school property — they, in particular, the students who have been disciplined for such behavior, are aware of this fact because it tends to be the same students getting into trouble.

As explained by Geneva Saunders, principal of Gates County High, safety is the school’s number one priority.

“We don’t try to keep students from flipping to punish them, the only reason we try to keep them from doing it is because it’s a safety issue,” said Saunders. “You have to be so careful here when you’re responsible for the children and we just feel like we can’t have the kids jumping off of everything.”

Saunders, after being approached by a teacher at the school on several students’ behalf, is looking into allowing interested students to perform their stunts during a half-time show at an upcoming basketball game. She is awaiting response from officials at the Gates County Schools’ Central Office.

The school’s stance is legitimate, as they simply have to take into consideration each child’s safety, as well as potential insurance issues that may arise, (i.e., it’s a liability concern). The students’ complaints, while they may not justify knowingly breaking the rules, are also valid. Claims ranging from participants in sports such as football, baseball, soccer, etc., being allowed and encouraged to do what they love; not having anywhere to practice; or any support, are understandable frustrations, particularly when seen through the eyes of a teenage boy.

“I don’t think the kids see it as a safety issue at all; they see it as this is something they should be able to do,” said Saunders.

The Gates County Community Center could possibly be an ideal location to host a scheduled, organized outlet in a safe environment for these kids to pursue their hobby. Because the community center, as of now, cannot accommodate these teens, the closest place they have to practice is at Triple T Sports Center, located on Constance Road in Suffolk, Va. Triple T primarily offers classes, including ballet, tumbling, karate, creative dance, and gymnastics, but they also have an “open-gym” night every Friday between 7 and 9 p.m. For a $10 charge, children up to the age of 17 can come in and use the equipment.

Though no interested youth have yet approached the community center staff, as they were under the impression that they would be unable to practice their craft there, having been reprimanded before for flipping outside, an employee of the center offered a potential option. Provided an adult were present to supervise, and that the gym had not already been designated to another event (and, of course, permission was received from the supervisor, Lulu Eure), these teens could in fact use the community center as a place of refuge, so to speak. While the equipment available to these athletes would be limited to what the center readily has available, it would satisfy the teens’ greatest desire: to have a close place to participate in their parkour with no fear of punishment.

According to the official American Parkour website, parkour training focuses on safety, longevity, personal responsibility and self-improvement. It discourages reckless behavior, showing off, and dangerous stunts.  As Johnston pointed out, there is a level of social enhancement involved as well.

“We build each other up, said Johnston, whose family supports his interest.

Many of these student’s parents are not critical of their child’s hobby, but in fact are supportive, and impressed.

“My parents are just glad I’m doing something physical. It keeps me out of trouble and they think what I do looks pretty awesome and they wish they could do it,” said Funk.

Kinard admitted that while his parents worry, they are very supportive — offering words of encouragement and driving him to Suffolk and picking him up from Triple T whenever their schedule and budget permit.

A mother of a Gates County High student who wish to remain anonymous described her son’s hobby as such: “As a parent, of course safety is always a concern. Although I don’t condone ‘flipping’ at school, especially since kids know it’s not allowed, I think these students have a great talent. I personally know most of the students who have been disciplined at school. I find them to be good kids who just want to hear someone say, “Wow —that’s great!” Instead of ‘you can’t do that’, I’m proud of my son’s capabilities and the fact that he’s not sitting in front of the TV all the time. It takes a lot of physical strength to do parkour, strength these kids wouldn’t have if they were drinking or doing drugs. That’s the number one positive thing to me.”

More information on parkour, its origins, purpose and benefits can be found on the American Parkour website. Also, YouTube has available an abundance of videos showing individuals parkour feats. Even some of the Gates County high students have posted videos on the site.

AHOSKIE – Hertford County burst out of the gate here Tuesday. The Lady Bears scored the first 10 points and... read more