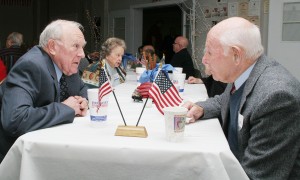 Dr. Thomas Vinson (left) and Edwin Brett were among the local men saluted Saturday night during a banquet staged by Marty Davis to honor World War II veterans. The banquet was held at American Legion Post 102 in Ahoskie. Staff Photo by Cal Bryant

AHOSKIE – It was a walk back in time here Saturday night.

Dressed in red, white and blue streamers with music from the 40’s playing in the background and the walls covered with old photos, posters and newspaper clippings, the banquet hall of American Legion Post 102 took on the feel of a USO Club, all in an effort to pay tribute to a group hailed as members of America’s greatest generation, those who fought during World War II.

Organized by Marty Davis, a ranking officer with the Hertford County Sheriff’s Office, the event was billed as the “Bestowing Honor Banquet.”

Davis was not deterred that there was no documented list of World War II veterans. Instead, he relied on word of mouth and went out and knocked on doors, finding 17 that were interested in attending the tribute.

The event organizer said he was amazed when he asks children of today who fought in World War II.

“They will answer, ‘I don’t know.’ I’m one of those guys who wants to do more than just give these guys a flag and say thanks for what you’ve done. They deserve more than that, they deserve a night that they can enjoy,” Davis remarked.

And that’s exactly what Davis, his wife, Shelia, and their two daughters, Kelly and Reagan, set out to do. What started as a simple thought turned into a banquet well worth attending. Davis was aided in his effort by numerous sponsors.

John Bracy, Commander of American Legion Post 102, welcomed the group on behalf of the Post. He thanked Davis for staging the event.

“I honestly believe that you are America’s greatest generation, Davis said in his opening remarks. “Your stories filled my heart with joy. I got a chance to talk with heroes. I lived and breathed World War II for three months, it’s a war that always intrigued me.”

He continued, “When I look at ya’ll and see what you have done for this country; the freedom that you have given us is unequaled anywhere in the world and I, for one, do sincerely appreciate the sacrifices you made. I try to instill in my family of the things you done to guarantee our freedom, the way we can go out today and enjoy the simple things in life.”

“Sadly we don’t often think about freedom,” Davis noted. “Although it may be difficult to describe how freedom feels, fortunately by the grace of God and by the unselfish and courageous acts of people like those sitting in this room tonight, Americans do know what freedom feels like because of what ya’ll did. Our freedom comes from the all mighty, but the protection of that freedom has been entrusted to a brave and gallant few throughout history, some sitting right here tonight.”

Davis cited the Bible, Luke, chapter 2, verse 8…“And there were in the same country, shepherds abiding in the field, keeping watch over their flock by night.”

“Just as those shepherds were prepared to defend their flock from all kinds of threats and menaces, so have America’s ever vigilant sentinels stood at the ready, willing to make any sacrifices, including the ultimate sacrifice if called upon to do so, to protect that cherished thing called freedom,” Davis stated. “Thank you for that freedom.”

“Tonight I’m in the company of true American heroes,” General Jennette said. “As a solider I’ve been doing this for about 32 years, you guys are why I put the uniform on every day. I’m here because of your service and what you’ve done for this great country.

“Tonight is a time of remembrance, a time of honor, a time to give thanks to those who have served and given so much to ensure that our nation has survived,” Jennette stressed before calling for a moment of silence to pay tribute to those who gave their lives to protect the freedoms Americans enjoy today.

“America has fought many wars, from the Revolutionary to the present global war on terrorism, but none so more worthy than World War II,” noted the General. “World War II was the most momentous war in all of history, impacting the world’s population even today.”

General Jennette, who lives in Windsor, said that many were close to someone who served in World War II, adding that those veterans have a story to tell. He told one of his own, reading from the words penned by William Castelloe of Windsor, who served as a private assigned to the 5th Marine Division during World War II. He was part of the force involved in the famous battle of Iwo Jima (February 19 – March 26, 1945). He and his comrades came under heavy fire from Japanese rockets, mortars and machine guns. He saw the American flag raised on Mt. Suribachi, a moment captured on film that has become an icon of that fierce fighting for American freedom.

Citing Castelloe’s words, Jennette said, “As for my actions on Iwo Jima, since I was a sincere and dedicated U.S. Marine in body, mind and spirit, when called to charge forward, I charged; when called to run back for more ammo or to help the wounded, I went, with little time to be afraid. No hero, I just did what I had to do.”

Castelloe, who joined the Marines three months shy of his 18th birthday, spent two years in the military, 20 months of which were on foreign soil. He died last year at the age of 84.

“Every time I put on my uniform, I stand on his shoulders,” Jennette said. “And I proudly stand on every one of your shoulders, the men of the greatest generation this nation and this world has ever seen.”

Those in attendance enjoyed a meal catered by Parker’s Barbecue of Greenville. Afterwards, the honorees and other guests were treated to a comedy routine performed by Marcus Knowles, accompanied by his daughter, Hayley Rivera.

Door prizes were awarded to the honorees and their spouses.

By Mike Williams Analyst LASKER – In a game highlighted by alternating spurts, Lawrence Academy produced the one that counted... read more