The sound of progress 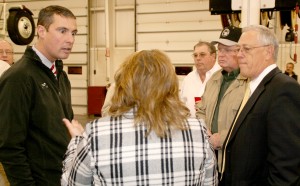 WINTON – The sound of new jobs is echoing throughout Ahoskie and the Roanoke-Chowan area.

Work is underway at the old G-P plant on NC 561 East in Ahoskie, the site of the local area’s first renewable energy plant owned by Enviva LP, a leading manufacturer of processed biomass fuel in the United States and Europe. The Richmond, Va.-based company announced shortly before Christmas their plans to build a wood-pellet manufacturing facility in Ahoskie.

The project will bring 53 jobs to the area as well as providing a big boost to local timber and logging operations that were severely impacted by the shutdown of the International Paper mill in nearby Franklin, Va. last year.

In an effort to get better acquainted with company and its unique manufacturing process, Enviva officials held a “meet and greet” event Thursday at the maintenance shop of Commercial Ready Mix Products near Winton. Over 200 were in attendance for a free pig-pickin’ and information session.

“Enviva chose to build its newest and, to date, largest bio-mass facility in Ahoskie and Hertford County. For that choice we couldn’t be more thrilled. The reception we have received here is heartwarming; we’re excited about this business venture,” stated Enviva’s Glenn Gray who will oversee the construction of the Ahoskie mill.

According to Gray, there are 96 pellet mills currently operating in North America. To date, six of those produce more than 100,000 tons a year. Within the next few months, Enviva will start up three new plants, including Ahoskie, all capable of producing in excess of 100,000 tons annually.

The Ahoskie mill is being built to a capacity of 333,000 tons per year, that’s two truckloads per hour of finished product going to the ports to be shipped overseas.

“To support that volume, we’ll need to purchase somewhere in the neighborhood of 740,000 tons of wood a year; 120 truckloads a day, most of it round wood; some residuals. That’s a lot of wood,” Gray noted.

Gray explained the process used by Enviva…wood products are delivered to the mill by logging operations (the wood yard will operate five days a week, 24 hours a day); the wood is processed through a chipper and then is screened to remove grit. The product is then dried (lowering the moisture content of the wood to 10 percent) before passing through sizing equipment. It then goes to the eight pellet presses at the mill that will produce the final product – a six millimeter pellet. The product is stored and shipped by truck to the port where it’s loaded on cargo container ships bound for Europe.

Enviva’s overall investment in the Ahoskie plant will exceed $52 million, half of which, said Gray, is the cost of the equipment.

Gray also spoke of the time and energy Enviva will invest into making the Ahoskie mill more efficient.

“What we want to do when a truck hits our scale is get them unloaded and back out as quickly as possible,” he said. “It’s not only about our efficiency, but about the efficiency of our suppliers. If we can get them turned around better than anybody else, we know we can become the choice place to take material.”

Wood will be unloaded in a number of ways, including by crane, wheel loader and knuckle boom loader.

As far as the hiring process (53 jobs at the mill), Gray said maintenance staff will be employed early in the process with the bulk of the remaining jobs filled in May and June. Training for those positions will take place in Ahoskie and at other Enviva plants.

“We’re not investing money in this plant in Ahoskie because we believe the market for our product will develop; that we’re hoping someone will buy this product…we are doing this because we at Enviva believe in long-term relationships with our customers, who allow us to invest heavily in manufacturing infrastructure, and raw material supply chains who allow us to deliver wood fiber to that customer,” Keppler said. “With this investment in Ahoskie, Enviva will become the United States’ largest exporter of solid bound mass fuel.”

“Our company is built on relationships,” he continued. “We build those by investing in our company, our employees, the community, the supply chain; you can count on us and we can count on you. Our word is our bond; we say what we’re going to do and we do what we say. We’re not here just for today, we’re here for this generation and the next.”

Keppler thanked local and state officials for helping to guide Enviva to the Roanoke-Chowan area. He said credit for that effort was due to the work of Hertford County Economic Development Director Bill Early, Ahoskie and Hertford County local government officials and North Carolina Governor Bev Perdue. He also thanked the Newsome family and their hospitality in hosting Thursday’s “meet and greet” event at their spacious facility.

As far as procurement strategy, Danny Maness of Enviva promised it would not be, “turn on, turn off.”

“We will not just open the gate, fill it up (the wood yard) and then cut everybody off for a week or two,” Maness stated. “It will be a managed inventory and a managed procurement system; if you are a regular supplier you will be able to haul on a regular basis.”

He added that pricing for the products will be based on fair market values as well as the quality of the wood.

The Ahoskie mill will not initially crank-up at full production, rather taking a little wood as early as August with a complete ramp-up during the first or second quarter of 2012.

“We want our suppliers to have a good reputation because we are partnering with you; if your reputation is bad then that spills back on us,” Maness observed.

Maness said he would send out an e-mail newsletter on a regular basis, updating the local logging operations on the status of mill construction and the process will begin of accepting wood. He said he would meet with suppliers to discuss joint opportunities for doing business.

“Suppliers need to start thinking now if they want to do business with Enviva and if so, what kind of product do they need, at what volume and when do they need it,” Maness said. “We can’t take it all beginning August 1; some will have to wait until September 1, or October 1 and some early next year.”

Enviva offers contracts to its suppliers…flexible three-month, six-month, annual or multi-year. There are committed supplier contracts (mutual agreements to supply pre-set volumes of wood on a consistent basis); regular gate wood (not locked down to volume) and uncommitted gate wood (which comprises only 15 percent of what Enviva needs to operate the mill).

Employment opportunities at the mill in conjunction with the impact Enviva will have on the regional timber industry and transportation (trucking) companies will provide a big boost locally.

For more information about Enviva, including job opportunities, go to www.envivabiomass.com.

WINTON – The decision to invest over $2 million into a sanitary sewer district for the Tunis community now rests... read more