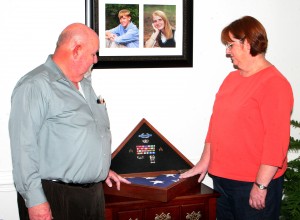 Rev. Willie and Diane McLawhorn look over the military decorations and the flag that covered the coffin of their son, Will, who was killed in action on Dec. 12. Staff Photo by Thadd White

CONWAY – He believed in journey.

And he believed death would only be another great adventure.

Sgt. Will McLawhorn took that great adventure when he was killed Dec. 12 in Afghanistan while serving his country in the United States Army. In death, he is remembered as a hero – a man fighting a battle for freedom and serving his country faithfully in his chosen profession.

In life, Will McLawhorn was a caring and devoted family man, described by his family as a soft-hearted person who did everything he could to prepare his parents and sister for the real possibility that he may never return home.

Will’s parents, the Rev. Willie and Diane McLawhorn, and his sister, Melanie, each had specific memories of discussions with Will about the possibility that he may perish while doing his duty.

Willie McLawhorn said that he and his son were driving down the road before Will went to Iraq in 2007.

“I told him that I knew I baptized him, but I just had do know,” Rev. McLawhorn said. “He said, ‘Dad, I know what you’re asking and I’m okay. There’s no need worry. I don’t always live like the Lord wants me to, but I am His.’ That eased my mind if something were to happen to him.”

Will’s mother, Diane, also talked to her son about the possibility of him not returning home safely.

“He made comments a lot of his life about not feeling like he would live to be old; that he would die young,” Diane McLawhorn said.

She said that last August she had a discussion with her son in which he made a comment about not coming home.

“I kind-of chastised him and told him not to say that,” she said. “He got serious and said told me that we really needed to talk. He said, ‘I’m going to be okay and I need to know that no matter what happens, you’ll be okay with it too’.”

Diane McLawhorn said her son reminded her that he was a Christian and that he would be okay. He asked her to imagine the worst thing that could happen and to try to learn to deal with it in her mind.

“I asked how he felt about it and he said, ‘it’s just another great adventure’,” Diane McLawhorn said.

Melanie McLawhorn, Will’s sister, said she had an idea of his feelings when he gave her his dog tags.

“Before he left, he gave me his dog tags and told me because he wasn’t married and didn’t have a girlfriend, I was the woman he wanted to have them,” Melanie said. “When he gave me the dog tags, I kinda knew he wasn’t expecting to come back.”

And while the family is saddened at his passing, they all know he was doing something he loved.

“He always knew this was what he wanted to do,” Melanie said. “When we were kids, we’d make forts and throw pine cones like they were grenades. He always said being in military was something he was going to do.”

Just before leaving for Afghanistan, Will was working towards becoming a Sergeant. During his interview, he was asked about his goals.

Diane McLawhorn said her son felt he has something to prove during his military career.

“He had gotten into some trouble here and decided to go back to his original plan after high school which was joining the military,” she said. “From then on, it was full speed ahead.

“Will thought the military would make a man out of him and he had a lot to prove to himself,” the mom continued. “He thought he could prove something to himself and others that were important to him. He definitely wanted his dad and me to be proud of him.”

Will McLawhorn was born in Columbus County where his dad was pastoring at Western Prong Baptist Church. He resided there until the family moved to Conway when Rev. McLawhorn became pastor of Conway Baptist Church.

He always loved sports and played basketball and baseball during his high school career at Northeast Academy. He was particularly good at baseball and was named to the All-Roanoke-Chowan Team his senior season with the Eagles.

After graduating, he intended to enter the military, but decided against it for personal reasons. After getting into some trouble in town, he decided it was time to go back to that original plan.

Once in the Army, McLawhorn excelled. He was a highly decorated soldier who was known for his love of God and country.

“He was very proud of his accomplishments in the military,” Rev. McLawhorn said. “He worked hard. He wanted everything he could get on his uniform and he wanted to excel at something.”

While he was a good athlete and an average student, McLawhorn didn’t find his niche until he entered the Army.

“He was good at baseball and good at basketball, but he didn’t excel,” Rev. McLawhorn said. “He was an average to slightly below average student.

“In the military, he was able to excel; had a desire to excel,” he continued. “He found something he was good at and wanted to do.”

“It was a more level playing field when he got into the Army,” she said. “It didn’t matter who you were, where you were from or how much money you made. It was a level playing field. All the military cared about was how hard you worked for it.”

Mrs. McLawhorn said that message was relayed to students at Northeast when he returned home.

“He would tell the kids he wished he had worked harder in school and that hard work pays off,” she said.

“Will loved his country,” he said. “When 9-11 happened, he would have joined the Army right then if he was old enough.

While he was an excellent soldier, Will McLawhorn was also a good person.

“He was a very sensitive child and he didn’t like discord,” Diane McLawhorn said. “If he felt like there was tension, it went all over him.

“He was very sensitive as an adult as well,” she continued. “I wasn’t sure how that would work in the military, but one of the generals told us that a sensitive person makes the best soldier.”

Diane McLawhorn also said her son was a “Mama’s boy” who never made any apology for that.

Melanie McLawhorn remembered Will as an excellent brother.

“We always had this type of connection that you only see with brothers and sisters,” she said. “We always could read each other. When we were younger, we would fuss and fight, but as we got older the five years between us didn’t seem like that much and we became best friends before he left.”

He was someone for whom family was important.

“My fiancée has two children and he has custody of them,” Melanie McLawhorn said. “I became a step-mom before I became a wife, but Will never cared about the step part. He took them in like they were mine.

“He was that way with everyone,” she continued. “If you were family and friend to him, that’s what you were. It didn’t take blood ties for him to consider you family.”

That sort of brotherhood also extended to the 101st Airborne Division, where he became part of the Screaming Eagle family.

“There’s a bond that develops between soldiers in combat that civilians simply can’t understand,” Rev. McLawhorn said.  “They eat, sleep and battle together. It’s intense all the time. There is a camaraderie there that those of us who haven’t been there can’t understand completely.”

Mrs. McLawhorn said Will had even made the statement that dying was not the worst thing that could happen.

“He said the worst thing would be for him to live and lose his guys,” she said.

In the end, Will willingly gave his life for his country and his fellow soldiers.

“The day he deployed wasn’t lost on him,” Rev. McLawhorn said. “He deployed on June 6 – the anniversary of D-Day. He was very up on history of the 101st especially the 502nd Infantry. The historical part of that day was not lost on him.”

And despite his loss, his family believes he was doing what he loved and that brings them comfort.

“It has nothing to do with me,” Diane McLawhorn said. “Willie could tell you, I am the weepiest person there is. It’s not me. It’s the prayers offered for us and it is wanting to honor Will.

“The grief is tremendous, but he wouldn’t want me to be weeping all the time,” she continued. “It also helps that he prepared us.”

“We’re consoled by the fact that he loved what he was doing,” he said.

His wife added, “If I had thought for one minute he hated what he was doing or that he didn’t want to be there, it would have been horrific. There is something about knowing your child was doing what he wanted to.”

The other reason the family has been able to handle it is because of their Christianity.

“Will believed in Jesus Christ as Savior and as Lord,” Rev. McLawhorn said. “Those of us who are believers know that we will be reunited. That doesn’t mean it doesn’t hurt and we don’t have our moments.”

It is that faith that helps the McLawhorns every day as they remember a man who was a hero to a nation, but even more so at home.