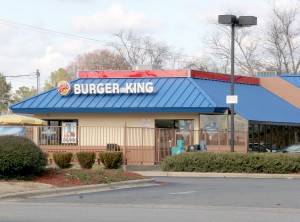 According to APD Major Jimmy Asbell, three masked men, two brandishing weapons (one with a handgun and another with a knife), entered Burger King, located at 1101 East Memorial Drive, at around 11:16 p.m. Three employees were working at that time, one in the office area where they were counting the day’s business proceeds in order to make a bank deposit.

“Three males, all dressed in dark clothing and each wearing a mask to cover their face, entered the restaurant through its east side door and immediately made their way behind the counter,” Asbell said. “They demanded the employees to get down on the floor and forced them to remain there at gunpoint and knife point.”

An undisclosed amount of cash was taken, as were cell phones from two of the employees and a wallet, containing cash and personal items, from the other worker. None of the employees were injured.

Asbell said the three suspects exited the restaurant through the same door they entered. They were described as black males, standing between 5’9” and 6’ tall. Restaurant employees believe the trio left the parking lot on foot.

Anyone with information on this armed robbery is urged to immediately contact the Ahoskie Police Department at 332-5011. Detective Sgt. Stephen White is handling the investigation.

There were no surveillance cameras at Burger King.