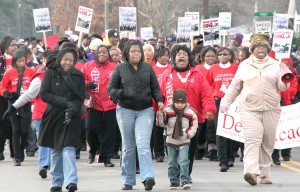 AHOSKIE — “An individual has not started living until he can rise above the narrow confines of his individualistic concerns to the broader concerns of all humanity.”-Rev. Dr. Martin Luther King Jr.

On Monday, Dr. King’s words were audible and his dream visible at the Rev. Dr. Martin Luther King Jr. March and Celebration held at the New Ahoskie Baptist Church. Coordinated by Ahoskie Alumnae Chapter of Delta Sigma Theta Sorority, Inc., the celebration was made possible through a $5,000 grant from the North Carolina Martin Luther King Jr. Commission.

The top three essay winners in the Dr. King essay contest were honored with education savings bonds for their work. In the essays, the contestants were asked to make a connection with Dr. King’s message and their lives.

Crystal Deloatch was recognized with a $500 education savings bond for her first place essay titled, “Keeping the Dream Alive,” which she was invited to share with those in attendance.

Deloatch said she wanted to be a person of peace who stands up for all races.

“There is a whole world of disadvantaged people who are still living in poverty, there are people who still discriminate and there are still people fighting for equal rights,” she said. “I believe there should be equality for all of God’s children.”

Desmond Gatling was presented with a $250 education savings bond for second place in the contest and third place winner Amber Moorings earned a $100 savings bond.

“We’re here because we want to bring people together; Dr. King believed in unity, peace, love and non-violence,” said Linda McNair-Moore with Delta Sigma Theta. “I must say that we’re glad with the Roanoke-Chowan community that we have gathered here today in peace, in love, in unity and togetherness. This is the beginning of a beginning. We hope and pray it won’t stop.”

New Ahoskie Baptist Pastor C. David Stackhouse, who served as the presiding officer, reminded the audience how Dr. King, in addition to his Civil Rights work, was a reverend as well.

“There’s no greater, eloquent voice that has ever pronounced the gospel, proclaimed the gospel than the Reverend Dr. Martin Luther King,” he said.

Rev. Thomas L. Walker, Senior Pastor of Ebenezer Baptist Church in Rocky Mount, was the featured speaker for the celebration. Introduced to the audience by District 5 State Representative Annie W. Mobley, Walker has been involved in several advocate groups as well as political and religious entities. He also is active in promoting prostate cancer awareness for men of all races.

At the beginning of his speech, Walker referenced to the Book of Hebrews, particularly the verse “Though he is dead, he speaks by faith.”

“Dr. King is dead, but he’s still speaking, and Lord knows we need to hear from him,” said Walker.

Walker spoke of the important balance of a good education and good parenting.

“There was a time when it was against the law for us (blacks) to read and to write,” he said. “That’s because the man knew that the reader is a leader; that a writing man is a read man; that education is power.”

Walker said he hoped people would not forget the value of an education.

Walker noted a few of Dr. King’s books including, “Stride Toward Freedom” (1958), in which, according to Walker, King wrote about persistence and determination in order to acquire freedom. Walker referred to 1963 when King questioned people’s desire for a “promissory note” on freedom.

“He raised the question, ‘Why should we wait’,” said Walker.

Noting the changes over the past years, including the election of President Barack Obama, Walker asked the question what would Dr. King think about the current time.

“Martin would have a lot to say about America and about us right now,” he said. “What would Martin say to our children? He would say precisely what Crystal (Deloatch) said a few moments ago, that you need to strive to get education, but you need to know that character must go along with that.”

Walker continued that the late civil rights leader would discourage young people from hanging around the wrong crowd.

“You’ve got folks that would criticize you for being progressive,” he said. “And I’ve never seen any thing like these young people, where our society has gotten to the point where you’re embarrassed for doing good.”

Walker said there should be no shame in doing good and that the devil will orchestrate all kinds of ways to enslave people.

“You can be enslaved by your peers, who have no set agenda,” he said. “You are not wicked if you wear your pants up.”

Walker said Satan has a hold on young people and that the community needed to know “it’s always right to do right.”

“You have power if you dare to be different,” he said. “Don’t ever worry about being like everybody else; just be where God wants you to be.”

WINTON – It promises to be the “coolest” event of the winter. As a unique fundraiser, Special Olympics of Hertford... read more