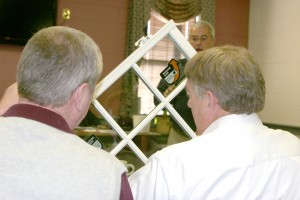 Commissioners Joe Alexander (left) and Collins Cooper take a closer look at one of the window replacement options for the Windsor Town Hall. The Windsor Commissioners received information about three options and plan to make a decision later this month. Staff Photo by Thadd White

WINDSOR – The exact design of the new windows for the Windsor Town Hall hasn’t been chosen yet.

The Windsor Board of Commissioners, who met Thursday in their regular monthly meeting, did, however, make some determination of how to proceed.

The board is working to finish the renovations planned for the town hall, which include windows, doors and other upgrades. The renovations were planned before the town was flooded last year, but had to be expedited when the building was damaged by flood waters.

Thursday Ted Winslow of Riverbank Building Supply appeared before the board to offer options concerning the windows to be used for the renovation. The first group of replacements he discussed were the doors on the front and back of the building and the three windows across the façade of the structure.

All of those items have to be custom made because of the size of the window and door frames. Winslow said the custom design would match what is currently in the building.

“They are all custom made and can’t be duplicated by anything made in a factory,” Winslow said.

Commissioner Bob Brown said he wasn’t sure why the town would spend roughly $6,000 on windows that looked the same as those currently in the building. Winslow said it would help with energy efficiency.

Town Administrator Allen Castelloe said it would take quite a while.

Winslow said the town could consider storm window covers for those two panes which are in the Commissioner’s Room at Town Hall.

Castelloe said those two windows were not of great concern, but the one in Town Clerk Leana Wynne’s office was a major problem because of letting in elements from outside.

Winslow suggested that window could be replaced while leaving the two in the commissioner’s room because they would all still look the same.

The board agreed by consensus to move forward with the replacement of the doors, but to only replace the window to the left of the doors (facing town hall) because of energy concerns.

The governing body then shifted its focus to the rest of the building where 17 more windows must be replaced.

“What are we giving up in quality,” Brown asked, referring to the difference in the Andersen window and the replacement unit.

“This not being wood, it won’t ever rot,” Winslow said. “They are less expensive by far than Andersen, but each has strong points.”

Winslow said the middle price, however, represented the best bargain with a higher quality window than the lower end, but not as expensive as the Andersen.

Mayor Jimmy Hoggard asked if the town’s design expert, Linda Hoggard, had seen the windows. She said she had not.

Winslow said he had ordered a sample that would be in place by January 24 and the town board asked Linda Hoggard to make sure she saw the sample and then report back to the board when it reconvenes Jan. 26.

WINDSOR – Magistrates in Bertie County will be safer in the coming weeks. That will happen thanks to decisions made... read more