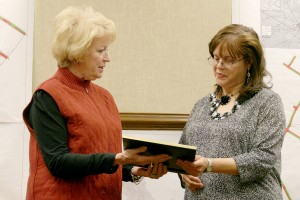 Evelyn Howard (right) receives a framed copy of the resolution of appreciation read in her honor on Tuesday by Ahoskie Mayor Linda Blackburn. Howard, who serves the town as Assistant Manager, Clerk and Finance Officer, is retiring Jan. 31 after 30-plus years on the job. Staff Photo by Cal Bryant

AHOSKIE – Like baseball, there’s no crying in local government, but that didn’t stop the tears from flowing here Tuesday morning.

While she still has a few weeks separating her from a well-earned retirement, Evelyn Howard’s eyes filled with tears as she made an emotional farewell speech to those gathered at the regular monthly meeting of the Ahoskie Town Council.

After relaying personal sentiments to each of the five members of the Council as well as the Mayor and Town Manager, the retiring Assistant Town Manager, Town Clerk and Finance Officer said, “I will miss each of you. Thank you all for a wonderful 30 years; I’ve enjoyed working with the town, its employees and the citizens of Ahoskie.”

Ahoskie Mayor Linda Blackburn praised Howard for her many years of service to the town.

“We all – Councilmen (Buck) Suiter, (Winfred) Hardy, (Malcolm) Copeland and (Maurice) Vann and Councilwoman (Elaine) Myers want to express our gratitude and appreciation to Evelyn Howard for her 30-plus years of dedication and service to the Town of Ahoskie and its citizens,” Mayor Blackburn said. “We wish to thank you for a job well done and wish you well in retirement.”

“Evelyn Howard has served with diligence and with the best interest for all of the citizens of the Town of Ahoskie for more than 29 years and because of her genuine and great service to the town and its citizens, the [Ahoskie] Town Council wishes to show appreciation for her commitment,” the resolution read.

In addition to the Resolution of Appreciation, town officials awarded Howard with a monetary retirement gift.

After the resolution was read, Howard was given a standing ovation by those attending Tuesday’s meeting, which included members of her office staff as well as all department heads.

“We all work together as a team, that’s what makes our town what it is today,” Howard remarked.

With Howard’s pending retirement (effective Jan. 31), the Town Council on Tuesday approved two measures to help fill the void. Lori Harrell was appointed Deputy Town Clerk, with full authority to perform any duties of a Town Clerk. Harrell and Patricia Bradley were named as Accountant Technicians, assuming the roles and responsibilities of the Finance Director’s position. Both are currently employed as office workers at the Ahoskie Town Hall.

Mayor Blackburn formally swore in both women to their respective new roles.