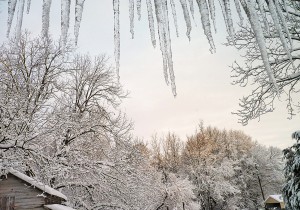 Old Man Winter delivered another round of icy weather on Monday night into Tuesday morning, but nothing like the Christmas weekend storm as shown in this photo from Woodland. Contributed photo by Barbara Gosney

It appears the Roanoke-Chowan area dodged the nasty weather; however, a wintry mix is still possible for the morning hours today (Tuesday).

A period of sleet, mixed with light snow, began shortly past midnight. That, combined with very light freezing rain, has led to a few icy spots on local roadways, especially in areas that were not pre-treated as well as on bridges and overpasses.

By 8 a.m. this morning, there were a few reports of motor vehicles accidents; none appeared to be serious in nature. There was a report of an accident on the Mayor Billy Hill Bridge, spanning the Meherrin River in Murfreesboro. Ice on the bridge was reportedly the cause of that mishap.

The National Weather Service Office in Wakefield, Va. has the Roanoke-Chowan area under a Winter Weather Advisory until 10 a.m. Tuesday. NWS officials predict that the icy mix will change over to all rain later Tuesday morning as temperatures rise above freezing.

Tuesday’s high is expected to be in the mid-30’s, but the low tonight will be around 25 degrees, meaning any moisture left on the local roadways will freeze, leading to dangerous driving. Wednesday’s high will be in the low 40’s under mostly sunny skies.

“You need to give yourself plenty of time to reach your destination,” North Carolina Highway Patrol First Sgt. Todd Lane said. “Keep an eye out for shady places because that is where ice is more likely to accumulate and exercise caution when traveling over all bridges and overpasses.”

“We receive an abundance of calls when we experience winter weather,” First Sgt. Lane said. “It may take up to an hour to get to someone who has been in an accident, so you should be prepared with winter gear.”

While the forecast does not indicate any major accumulation (less than one tenth of one inch), there is still a need to keep an eye on possibly changing conditions.

“It’s important that you know what’s going on,” said Bertie County Emergency Management Coordinator Rickey Freeman. “I’d suggest that anyone planning to travel Tuesday make sure they have checked the weather forecast ahead of time.”

As for those staying in the home, Freeman said it was important to make sure that people stay warm and know what is going on around them.

“Hopefully, there won’t be that much to this storm,” Freeman said. “The closer it gets, the more it looks like we may have been spared the worst of it, but it can always change quickly.

“I’d suggest that everyone have a safety plan in mind and keep flashlights and winter clothing handy in case they are needed,” he said.

Freeman said that if the storm causes the loss of power, he believed it would be only for a short time.

“North Carolina Power and Roanoke Electric have people on stand-by already,” he said Monday afternoon. “If there is a loss of power, they’ll move quickly to fix it as soon as its safe.”

In the event the power is out, Freeman said he would suggest those using an alternative heating source such as kerosene heaters or wood stove to keep an eye on them.

“There may be situations when you have to use alternative heating methods if the power goes out, but they can be dangerous,” he said. “Just keep an eye on them if you have to use them.”

In the meantime, North Carolina Governor Bev Perdue issued Executive Order No. 78 Monday afternoon, declaring a State of Emergency throughout the state because of the winter weather.

The declaration allows the governor to mobilize the necessary resources to respond to the storm.

“Once again, we have a winter storm that will impact almost the entire state with some type of frozen precipitation,” Governor Perdue said. “We know travel will be hazardous… so we’re urging everyone to be safe. Don’t take any unnecessary risks if you don’t have to and exercise caution if you must travel.”

The N.C. Division of Emergency Management recommends the following tips:

Bre’ Ana Powell of Woodland places a rock on the Ashe Street memorial to her great aunt, Phyllis Powell, who... read more