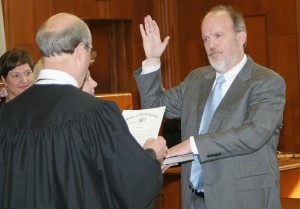 Tom Jones Jr. (right) of Murfreesboro accepts the oath of office as he was sworn in on Saturday morning as the newly elected District Court Judge of Judicial District 6B. The ceremony was conducted in the Superior Courtroom of the Hertford Co. Courthouse. Shown administering the oath is Chief District Court Judge Thomas Newbern with Jones’ wife, JoAnn, holding the Bible. Staff Photo by Amanda VanDerBroek

WINTON—January 1 not only brought a new year to the Roanoke-Chowan area, but a new 6B Judicial District Court judge.

As Jones recited the oath, administered by Chief District Court Judge Thomas R. J. Newbern, his wife of 26 years, JoAnn, looked on while holding the Bible.

For Jones, and those who know him, the oath of office ceremony was a pinnacle of a law career that spans three decades.

Jones began his path toward law after graduating from the University of North Carolina at Chapel Hill in 1975 with a bachelor’s degree in English education. He then went to North Carolina Central University School of Law where he graduated in 1979.

For 30 years the Murfreesboro native practiced law out of a Main Street office in his hometown. The role as an attorney had him wearing many hats, including an attorney for Guardian ad Litem as a children’s advocate, and the attorney for the town of Conway. He is also a member of several professional and community organizations.

Jones won a bid for the district court judge seat in the November election, a position he is eager to take on with the same qualities that carried him through the past three decades intact.

“I will do what I promised what I said I would do to begin with,” Jones said to the audience just after taking the oath. “I’m not going to change; I’m still going to be Tom Jones Jr.”

Before Jones slipped into the judge’s robe, his law and judicial colleagues took the time to paint a picture of the Jones they have come to know.

After the opening of court by Hertford County Sheriff Juan Vaughan, 6B Senior Resident Superior Court Judge Cy A. Grant made his remarks to the new judge.

“In the past 28 years I have come to know Tom Jones as one of the finest attorneys in this area,” he said. “You couldn’t find any harder working attorney, one who not only justly represents his clients, but who was sincerely concerned about the case.”

Judge Grant said when he thought about Jones’ finest qualities, the one that stood out was his integrity.

“I can say that if Tom told you something, you could take it to the bank,” he said. “He would not mislead you.”

He continued, “And I feel confident that Tom will bring the same qualities of hard work, caring, concern and integrity to his new job as a district court judge. Also, I’m just as confident, without any doubt, that Tom Jones will be an outstanding district court judge, one who not only will follow the letter and the spirit of the law, but a person who will treat all people justly and most importantly fairly.”

Grant concluded that he was looking forward to having Jones as a judicial colleague.

Bertie County Clerk of Court John Tyler, standing in for District Court Judge W. Rob Lewis II who was under the weather, echoed Grant’s comments while offering his congratulations to Jones.

“We look forward to working with you,” he said.

District Attorney Valerie M. Asbell gave Jones well wishes as she introduced Jones to the audience before he took the oath of office.

Asbell said met Jones 17 years ago, soon after she moved to Hertford County and began work as an assistant district attorney.

“I soon learned that Tom was very good at his job, and what I mean by that is when we stood at these two separate tables, we sparred on occasion,” she said. “I’ve learned a lot over the past 17 years from Tom about his areas of expertise, and he has taught me a lot.”

She noted the common thread throughout Jones’ campaign was that he was going to bring justice and respect to the courtroom.

“I’ve heard him say on more than one occasion that the courtroom belongs to the people and each and every person that steps foot in this courtroom deserves to be treated with dignity and respect,” she said.

Asbell concluded that she was confident all of the characteristics Jones had displayed over the years would make him an excellent district court judge.

During his remarks to the crowd, Jones vowed to keep those familiar qualities he has become known for integral.

He noted there were many people in attendance that supported him during the election process.

Among those who Jones thanked was his staff at his former law office whom he credited to “running” the practice.

“There’s no telling how many people have come into my office during the election and said, what about your girls here in the office,” he said.

Jones said the office will remain open under the operation of Roanoke Rapids attorney Gilbert Chichester.

“I’m very thankful for that,” he said.

Jones concluded by reiterating that the courtroom belonged to the public at large.

“It is the people’s courtroom and I promise you all I will continue to do that,” he said.

After the ceremony closed, Asbell took an oath for another term as district attorney. Asbell won her primary bid in May and ran uncontested in November’s general election.