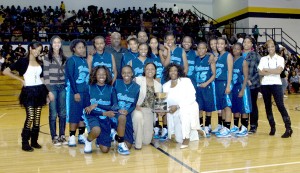 WINDSOR – When Alice Lyons retires from coaching basketball, she’ll be able to fill a trophy case.

And many of those trophies will come from the Roanoke-Chowan News-Herald Holiday Classic sponsored by United Country Joe Murray Realty.

The Bertie High School skipper added one more of those trophies Friday night when the Lady Falcons defeated host Hertford County High School 55-45 to earn their eighth consecutive championship in the tournament.

Zahkeya Morris scored 19 points to lead the Lady Falcons while Tournament Most Valuable Player Montreshia Perry added 16 in the win. Hertford County was led by 16 from Briante Bond.

The Lady Falcons dominated the opening period of play, outscoring the home team 16-8 en route to the victory.

Morris started the game with a three-pointer that was followed quickly by a Perry hoop as the Lady Falcons garnered a 5-0 advantage.

Takia Williams got Hertford County’s first bucket, but Morris hit a free throw and Perry nailed a three-pointer as Bertie took a 9-2 edge.

Camaryn Jones then scored for the Lady Bears and Williams added a free throw as they closed within 9-5 before Bertie got a hoop from Shadequa Battle.

Brandi Burden added a hoop for the Bears as they closed within 11-7, but a Morris three-pointer and a pair of free throws from Perry gave Bertie the 16-7 lead until Burden had a free throw.

Hertford County came back when Williams had two free throws to start a 6-0 spurt for the Bears. Sherniece Futrell and Bond had two hoops as HCHS closed within 22-14.

Bertie, however, came back with back-to-back hoops from Morris to make it 26-14 before a free throw from Larinda Fennell for the Bears.

Wilson added another Lady Falcon hoop to make it 28-15, but Bond scored the final two buckets of the quarter to help HCHS close within 28-19 at the intermission.

Futrell started the second half with a bucket for the Bears, but Bertie scored the next nine points unanswered to take a 37-21 lead with 5:07 to play in the third quarter.

After a pair of Perry free throws, the Falcons got hoops from Morris and Tyessence Martin before Dyleezia Warren hit three straight free throws to account for the nine-point run.

Burden stopped the spurt with a free throw, only to see Perry answer with the same at the other end.

Hertford County then scored seven of the next nine to close within 11 (40-29). Burden had two scores on the run while Bond had one.

Ebonie Perry closed out the quarter with a basket that gave Bertie a 42-39 lead.

Perry and Morris had successive scores to start the fourth quarter as the Lady Falcons took a 46-29 lead.

Bond then sparked an 8-1 run for the Lady Bears. She had four of the eight and Jones and Futrell added scores to close within 47-37.

The teams exchanged hoops the rest of the game with Bertie holding on to the 10-point cushion most of the way.

In addition to Perry’s selection as MVP, she was named the winner of the Cal Bryant Scholarship Award given by Ahoskie Pediatrics. She was joined on the All-Tournament Team by Morris, Wilson and Warren.