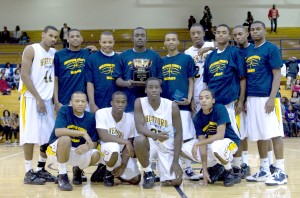 AHOSKIE – Jordan Jones made it two in a row.

So did Hertford County High School.

Jones, a senior for the Bears, was named Most Valuable Player of the tournament for the second straight year and added a $500 Charles Simmons Scholarship Award, which was given by Mizelle’s Discount Drug, to his $500 Howard Hunter Jr. Scholarship Award from a year ago.

Jones had 22 points in the championship game and Dekimis Perry chipped in 11 as the Bears used a balanced scoring attack. Bertie’s WyKevin Bazemore, also an All-Tournament selection, led the Falcons with 22.

Bazemore got the first hoop of the game, but Jones answered quickly to tie the score. Ryan Daye then hit for the Falcons and again Jones answered on the other end.

Bazemore had his second hoop to give the Falcons a 6-4 lead before D’Isaac Jordan scored a three-point play and a bucket in succession to help HCHS grab a 9-6 edge.

Two shots from the charity stripe by Bazemore got the Falcons within one and then Jones and Norman Cherry exchanged hoops to give the Bears an 11-10 lead after one quarter.

Jones added to the advantage as the second period opened, but Bazemore had a hoop and a free throw back-to-back to tie the game at 13-all.

Jones and Dontez Tyler had consecutive hoops followed by Jestin Thompson hitting 1-of-2 from the free throw line as the Bears surged ahead 18-13.

Bertie roared back, however, getting three straight points from Bazemore to close the gap to 18-16.

Perry had his first points of the night to stop the run, but Bazemore added another free throw and Marques Outlaw scored from the floor as Bertie got within one (20-19).

Shabazz Atkins, however, drained a three-point just before the first half ended to send the Bears into the locker room with a 23-19 edge.

Cherry had four of the first six points of the third quarter answered only by a Jones hoop as the Falcons got within 25-23, but the Bears scored the next seven straight.

Wayne Simmons started the spurt with a hoop that was followed by a Jordan bucket and a three-pointer from Petey Boone as HCHS built a 32-23 advantage.

Bazemore stopped the spurt with a free throw, but Jones answered with a basket at the 3:30 mark that gave the Bears a 10-point (34-24) cushion.

The Falcons again came back, however, with Travanti Wiggins and Bazemore sandwiching hoops around a pair of Jones free throws to close Bertie within 36-28.

From there, the Bears pulled away again, scoring eight of the final 10 points of the third quarter. Tyler started the run with a pair of free throws and was followed by hoops from Jordan and Boone before Bazemore hit two from the charity stripe.

Boone closed the quarter with a hoop that gave the Bears a 44-30 lead heading into the final quarter.

Dreyshawn Morris had a hoop to start the fourth period and then Daye added two free throws as the Falcons got within 44-34.

Boone then scored for the Bears followed by a Tyler free throw as Hertford County pushed back ahead 47-34.

Bertie closed within nine (47-38) after Morris scored and Bazemore hit two from the free throw line, but the Bears scored four straight and to push the lead back to 13 (51-38).

After an exchange of hoops, the Bears scored 10 of the final 14 points to secure the victory.

Also, after the tournament, the Bears were honored with the Richard Murray Sportsmanship Award for exemplifying the best sportsmanship in the event.