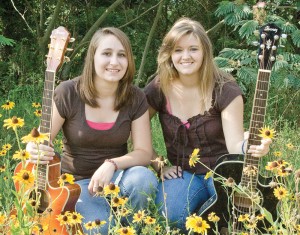 Rebecca Hobbs and Raven Wynn have combined their musical talents to release their first CD - “Be the Difference.” Contributed Photo

Singers, musicians and songwriters…all rolled into one; or in this case, two.

Gates County High student Rebecca Hobbs and her best friend, Raven Wynn, a senior who attends Camden High School, not only performed all the vocals and played guitar as well, with Hobbs also incorporating her talent as a pianist, but they wrote all of the songs on the album as well.

“We had to pick what songs to put on the album,” said Wynn, explaining that the duo had actually written a total of 18 songs. “We tried to pick which ones would work out best and what people would like to hear.”

While the girls had been toying with the idea of putting out a record for a while, when the opportunity arose to do just that they found themselves under the gun. Justin Holland, a friend of Wynn’s father, Billy Sadler, was in the music business and had hinted around that he was soon moving to Nashville.  Not wanting to miss the chance, the girls faced the challenge head-on and within a month had completed their end of the work in the studio.  The girl’s who described themselves as Holland’s little Guiney pigs, were his first clients to record an album.

“We recorded and did everything in a month, he mastered and mixed it in a month and then it came out a month after that,” said Wynn.

The girls finished their portion of the work on at 2 a.m. on July 16 — Wynn’s birthday.

“The girls are very much involved in praise and worship; we’re real proud of them,” said Rebecca’s mom, Marcia Hobbs, a third-grade teacher at T.S. Cooper Elementary.

Wynn and Hobbs represented Happy Home in a church conference talent quest in Prince George, Virginia. After winning the local competitions, the girls traveled to Florida where they competed against thousands of other teenage contestants. While they did not finish in the top three there, both considered the competition a valuable experience, having been able to receive critiques and comments from the judges.

The girls’ passion for music is rooted in a family interest.  Raven’s father, for instance, has experience in music, plays the guitar, and has spent a lot of hours working with them, particularly in the studio.

“My family is kind of on the sing and play side of things while Rebecca’s is more of the organizing and detail side,” said Raven.

Rebecca’s family has musical talent as well. Her mother plays the piano at their church, just as her grandmother did. As a young child, Hobbs spent the days with her grandmother and at the young age of 3-4 was introduced to the piano.  Hobbs currently takes piano lessons with Mrs. Mary Lee Taylor.

The first major musical accomplishment enjoyed by Hobbs was her contribution to T.S. Cooper, while a student there, by writing the school’s Respect song, which is still active today.

“It was the first song I ever wrote,” said Hobbs.

Though the duo does not know what the future holds, they intend to continue playing music and pursuing it on a professional level to the extent that they are able.

Wynn has applied to both UNC Chapel Hill and UNC Wilmington. She hopes to become a doctor.

Rebecca, who will graduate next year, is pursuing a career as a Christian Counselor and plans on completing a minor in music.

While their time of easily getting together to play will soon be limited, the girls do have an upcoming gig scheduled for New Year’s Eve at Jarvisburg Church of Christ.  They will be accompanied by longtime friend and fellow Christian music artist Justin Mitchell.

One thing is evident, whether the girls choose to practice music professionally, or as a hobby, it is a passion they are likely never to stray from.

Further information can be founded on the girls’ MySpace page: MYSPACE.COM/ravenandrebecca.

To purchase the CD ($8) you can either go to the above listed myspace page or contact the girls directly at ravenandrebecca@gmail.com.

WOODLAND — Heavy items, such a safe, do not always sink in water. That’s the lesson a trio of alleged... read more