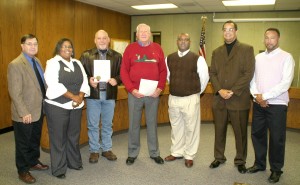 WINTON – It often comes without reward, but that fact is lost on those who give freely of their time to help others.

At the Dec. 20 meeting of the Hertford County Commissioners, the board took part in recognizing two local men – William Thomas Beckley and Roy Duncan “R.D.” Matthews – for their volunteerism efforts.

Hertford County Cooperative Extension Director Crystal Smith made presentations to both men, which included a Governor’s Award for Volunteer Service Certificate, a pin and a letter from Governor Bev Perdue.

The local Extension office coordinates the Governor’s Award for Volunteer Service for the citizens of Hertford County.

“This program has been in place for more than thirty-two years, honoring the true spirit of volunteerism in our state by recognizing individuals, groups and businesses that make a significant contribution to the their community through volunteer service,” Smith said, adding that over 16,000 North Carolinians have been recognized for their service since the program was launched.

“On behalf of Governor Bev Perdue and the citizens of Hertford County, we are please to recognize two dynamic individuals for their outstanding leadership in helping others,” Smith added.

Beckley was honored for donating his time as a volunteer helping people and organizations in need.  Whether it is providing financial support so the Ahoskie Library could achieve their building fund’s goal, or donating time organizing a fundraiser to help a local youth who was paralyzed in an automobile accident, he always helps. Beckley also sponsors a girl’s softball team through the Ahoskie Recreation Department and contributes to Ahoskie House Family and Friends Day.

Matthews has volunteered with Guardian Care of Ahoskie for 10 years.  He donates approximately 12 hours weekly.  He sets up for residents to play Bingo (frequently furnishing prizes from his personal funds), distributes mail to residents, shops for incidentals for residents, drive staff to special meetings or events, brings former residents to Guardian Care to visit and supports fundraisers.  He also voluntarily serves as Chairman of the Board of Directors of Ahoskie Rural Fire Department.

In addition to Gov. Perdue’s recognition of the two men, Johnnie Ray Farmer, Chairman of the Hertford County Commissioners, presented both with an official Hertford County lapel pin.

“We appreciate all the services you both render to the citizens of our county,” Farmer said. “Thank you for all you do.”

“It’s good to see that we still have faithful volunteers in our county,” Commissioner Howard Hunter III stated. “I really appreciate the work and the dedication they have shown to our citizens.”

“I want to thank both of them for their humanitarian efforts in our county,” Commissioner Ronald Gatling said. “I’m proud to have these two men as Hertford County citizens. Congratulations to both of you.”

“There’s nothing like the spirit of volunteering,” noted Commissioner William “Bill” Mitchell. “It’s good to know we still have people like Mr. Beckley and Mr. Matthews.”

For more information on nominating a volunteer (youth and adult) for the Governor’s Award for Volunteer Service, contact Smith or Melanie Storey at North Carolina Cooperative Extension, 301 Tryon Street, Winton; 358-7822.