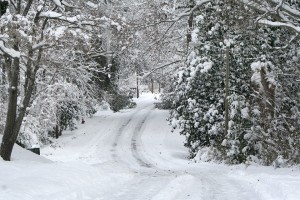 South Fourth Street in Murfreesboro appears as a winter wonderland after this past weekend’s snowfall. Staff Photo by Amanda VanDerBroek

How much snow actually did fall in the Roanoke-Chowan area Christmas night and Sunday?

According to the National Service Office in Wakefield, Va., that depends on your exact location.

The storm’s bulls eye appeared to be in the Aulander area, basically east and southeast of town where the NWS estimated 11 inches fell.

In an egg shaped circle around that area, a swath of snow totaled in the 8-to-10 inch range in places such as Ahoskie, Powellsville, Askewville, Windsor, Lewiston-Woodville, Kelford, Roxobel and just east of Woodland.

Lesser amounts (4-to-6 inches) were estimated westward in a line from Jackson to Seaboard.

No matter how much fell in your neighborhood, it resulted in the first White Christmas in decades in the local area.