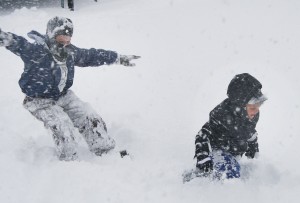 WINDSOR – A near foot of snow fell throughout Bertie County over the Christmas weekend.

Despite having a crippling amount of snow, however, there have been no reports of death or major injury and things are slowly starting to return to normal.

While the snow has made roads hard to travel, fire and rescue have been able to be available throughout the disaster and Bertie Memorial Hospital has remained in operation.

Bertie County Emergency Management Coordinator Rickey Freeman said he believed much of the credit for that was having such a report was the timing of the event.

“We fared pretty well,” Freeman said. “I think it was good that it happened over the holiday weekend because there weren’t as many people out.”

He said it was also good that county offices were already closed Monday for the Christmas holiday and that school was not in session.

“I think those things helped keep people off the roads this morning (Monday) and that’s certainly a good thing,” Freeman said. “There is some melting going on, but the roads are still in bad shape and people need to stay in if at all possible.”

Freeman said most people had stayed in during the weekend and while there were some minor issues with cars sliding into the ditch, there were no reports of fender-benders or any major accidents.

Another good point, Freeman said, was that power outages were limited and that the few that had been reported were taken care of quickly.

“I haven’t had many reports of power outages,” he said. “We did get a report from Connaritsa Road, but that was taken care of pretty quickly.”

He said that he believed that would continue to be the case over the next couple of days as things return to normal.

All told, the county received between 10 and 12 inches of snow from border to border, the Emergency Management Coordinator reported.

“We have reports of a foot in the Roxobel area and there seems to have been at least 10 inches throughout the county,” he said. “That seems to be a pretty standard number.”

Monday morning the North Carolina Department of Transportation was out working to clear roads in the county. Freeman suggested that anyone needing to drive wait until later in the day so that they could have time to get most of their work done.

Those who are staying at home are being urged to be careful as they try to clear away snow.

“You really need to be careful if you are moving snow out of driveways and porches,” Freeman said. “There is a lot of snow out there and it would be easy to get over stressed in trying to move it all.”

Anyone who has heating issues in their home are encouraged to call the Emergency Management Office.

Freeman said if the heat was gone from a home and it became and emergency situation, people could be aided by the Red Cross or Salvation Army. He said the two groups would help people find somewhere to stay for a few days until the situation can be resolved.”

Many of the businesses in Bertie County were open on Monday, he said.

“Most of the chain locations are open,” Freeman said. “There are some locally owned businesses that have chosen not to open because of the storm, but Food Lion and almost all of the convenience stores are open.”

While that is the case, Freeman said anything that someone needed should be taken care of before dark if at all possible.

“People need to be particularly careful as it gets into the afternoon and evening hours,” Freeman said. “It is going to freeze tonight and there will still be black ice tonight and into tomorrow morning.

“It’s melting a little now, but will freeze again tonight,” he added. “If you don’t have to drive, stay off the roads until tomorrow morning.”

No decision has been made about the opening of the county offices for Tuesday; one was expected later in the afternoon.