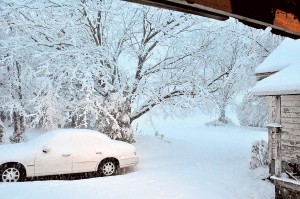 Fred G. Ricks of Creeksville submitted this “winter wonderland” photo to the R-C News-Herald. Ricks snapped the photo at around 7:30 a.m. on Sunday.

Reports of up to a foot of snow have fallen across the Roanoke-Chowan area, forcing the closure of local businesses as well as making travel extremely treacherous.

Meanwhile, a State of Emergency is in effect for the entire state. This declaration enables the governor or lieutenant governor to mobilize the necessary resources to respond to a storm.

It appears the heaviest snow fell between US 17 and I-95, an area that includes the Roanoke-Chowan. Reports of up to 14 inches of snow in Gates County have yet to be confirmed.

The snow tapered off late Sunday afternoon. Flurries continued into the nighttime hours on Sunday.

In the wake of the epic snowstorm – the third heaviest all time on record – there has been a rash of local motor vehicle accidents, some resulting in injuries.

Local law enforcement and EMS personnel are using four-wheel drive vehicles in some cases. There have been reports of county-owned ambulances getting stuck while answering calls in Hertford County.

All roads in the area are covered with snow and ice, making travel extremely dangerous. Union Street in Murfreesboro remains closed at Chowan College due to motorists being unable to navigate the steep hill there.

There were sporadic power outages due to the storm. Hertford County reported nearly 500 homes without electricity on Sunday. Crews from Dominion Power and Roanoke Electric Cooperative are working to restore electricity to the affected homes.

N.C. Department of Transportation crews across the state launched their efforts on Sunday to clear snow-covered interstates and freeways. In a proactive step, they pretreated the interstates and primary routes on Thursday with a salt and water solution called salt brine to prevent ice from bonding to the pavement.

The department encourages motorists to put safety first and not drive unless they have to. Conditions in many areas, especially secondary roads that have not yet been plowed, may be dangerous.

NCDOT urges drivers who do have to get out today to follow these safety tips:

Reduce speed and leave plenty of room between you and other vehicles;

Bridges and overpasses accumulate ice first. Approach them with extreme caution and do not apply your brakes while on the bridge;

If you begin to slide, take your foot off the gas and turn the steering wheel in the direction of the slide. Do not apply the brakes as that will cause further loss of control of the car;

If you have a cellular phone, take it with you; you can contact the Highway Patrol statewide by calling HP (*47)  or call the county emergency center by dialing 911; and

Come to a complete stop or yield the right of way when approaching an intersection where traffic lights are out. Treat this scenario as a four-way stop.

Weekend snow in the forecast

There’s a good chance the Roanoke-Chowan area will witness its first white Christmas in over 20 years. The questions are….how... read more