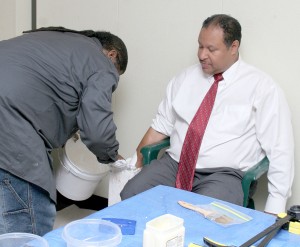 Hertford County Veterans Services Officer Andre Jones sits motionless as artist Alexis Joyner uses a plaster-type material to cast Jones right hand. The cast will be used to form a bronze handprint that will be the focal point of the Hertford County display at the North Carolina Veterans Park in Fayetteville. Staff Photo by Cal Bryant

WINTON – As a man accustomed to the hustle and bustle of a daily routine, Andre Jones was removed from that fast-paced element, if only for 30 minutes.

That’s how long it took for Jones to have his right hand cast in bronze here Dec. 13, an effort that will lead the Hertford County Veterans Service Officer to become one of 100 North Carolina citizens immortalized at the North Carolina Veterans Park in Fayetteville.

“It’s an honor to represent my county, and the other veterans of my county, at the Veterans Park,” Jones said. “The Park will go down in history; it will always be there and just think of the number of people that will see it.”

Jones recalled his years in the military…10 of them to be exact, all spent as a medical supply officer with the 115th MASH (Mobile Army Surgical Hospital). He helped to treat the causalities of war during a seven month deployment in 1991 to Iraq during Operation Desert Storm.

“It was a pleasure to serve my country and go into a war zone where I was able to help save lives,” Jones said. “That was a big deal to me, to serve my fellow man.”

Following his military career, Jones returned home where he first worked for a brief time as a jailer with the Hertford County Sheriff’s Office before taking the job as the county’s Veterans Service Officer. That occurred in 1997 and he’s since been a fixture in that office.

“I’ve enjoyed the time spent helping our military veterans,” Jones stated. “It brings me a lot of joy knowing that I can help. It’s great to see how their lives change for the better once they get the benefits they so well deserve.”

For four other Hertford County military veterans, they were well-deserving of inclusion on the Veterans Memorial. Jones chose them to share the honor and each had a cast made of their handprints that will become a part of the Hertford County display at the Park.

Those honorees include Jackie Eley of Murfreesboro, a 20-year U.S. Air Force veteran, Joe Dickerson of Murfreesboro who was part of the initial wave of U.S. troops to storm the beach on D-Day during World War II, retired U.S. Army Sgt. Major Johnnie Ray Farmer, a Vietnam War veteran, and Chad Stephens, currently a member of the North Carolina Army National Guard.

Over her career, Eley said she experienced the thrill of seeing the world with duty assignments in Japan, Taiwan, Italy and Germany. Stateside, she served at Holloman Air Force Base and Clovis Air Force Base, both in New Mexico, in Alaska and at Travis Air Force Base in California. It was at the latter assignment from where she retired in 1992.

Most of her career was spent in supply; inventory management was her specialty. She also spent some time in aircraft maintenance and munitions.

“I always felt it was my civic duty to serve my country,” Eley said. “After I did my first four years, I saw the adventure, the thrill of seeing the world; I re-enlisted and never regretted a minute of that decision to make the military my career.”

That thrill returned when Jones called to make Eley part of the local contingent that will represent Hertford County at the Veterans Park.

“This is a great honor; I was always proud to represent Hertford County and the state of North Carolina during my military career and it’s an honor to do that again,” Eley said.

At age 87, Dickerson will be among the oldest to be enshrined at the Park. Nearly 70 years ago, Dickerson was just a teenager when he volunteered to serve his country.

“I volunteered instead of being drafted because I don’t like the water and if I got drafted they would probably have put me in the Navy,” he recalled.

As things turned out, Dickerson did spend some time on the water, if only for a brief period.

June 6, 1944: D-Day – Dickerson recalls that day very well as he was part of the first wave of troops to take part in the largest amphibious invasion of all time. In excess of 160,000 troops stormed the beach at Normandy. For Dickerson, he survived a hail of enemy fire to join his comrades on Omaha Beach on the northern shore of France.

“I didn’t know what I was getting in to,” Dickerson said of what turned out to be one of the most historic battles of World War II.

He trained at Camp Wheeler, Georgia. From there he was shipped overseas to England where American and British forces honed their skills for nearly two years for the D-Day invasion.

By the time December of 1945 rolled around, Tech Sgt. Dickerson had ended his military career, one where he earned four Purple Hearts, the Bronze Star and the Silver Star for his courageous actions.

He moved to Murfreesboro, landing a job at Western Auto under owner George Gibbs in 1946. Four years later, Dickerson purchased the store from Gibbs and the rest, as they say, is history. He owned and operated Western Auto on Main Street in Murfreesboro for a shade over 40 years.

“It’s the only job I ever had,” Dickerson noted.

As far as his time in the military was concerned, Dickerson said it was a privilege to serve his country.

“We live in the greatest country in the world,” Dickerson said. “There’s nothing better than the U.S.A.”

If he would have known what awaited him on the shores of France some 66 years ago, Dickerson said he would not have hesitated to answer the call of duty.

“I always wanted to join the service,” he stated. “I did what I wanted to do and was proud to serve.”

He now stands ready to serve once again.

“It’s a privilege to have been selected as one of the participants (for this state memorial),” Dickerson said.

Stephens, a native of Como, also got involved in the military at a young age. The 1986 graduate of Murfreesboro High School joined the Virginia National Guard, part-time, when he was in the 11th grade. He went active duty with U.S. Army two years later (1988).

His first assignment came in Germany with an aviations unit. He came back to the States in 1990, stationed at Fort Benning, Ga. Upon his return, the Persian Gulf War began and he, along with most everyone on the base, was shipped to Iraq.

After an 18-month tour there, he came back stateside to train with the Army Airborne unit. That was followed by another tour in Germany where, with the Army downsizing at that time, he opted to leave the military in December of 1995.

One year later, he joined the North Carolina National Guard full-time, a career that has carried the Sgt. First Class to the present day where he works at armories in Williamston and Woodland. Both are infantry units, part of the 252nd Army Battalion.

He returned to Iraq as part of the global war on terrorism from Feb. 2004 to Feb. 2005. On one faithful day in June of 2004, his platoon was ambushed three times in one 24-hour period. Those attacks claimed his commander and one gunner. As they were attempting to evacuate those injured, his unit came under attack again, this time wounding seven of his comrades. In the third ambush, Stephens’ vehicle was blown-up, critically wounding his gunner and himself.

Despite the presence of shrapnel in his body and several burns, Stephens fought on.

“Out of the 38 guys I had on the ground that day, we only had 15 left to fight,” Stephens recalled. “We chose to fight, me included. We fought for two days before reinforcements came.”

Those acts of bravery under enemy fire earned Stephens the Silver Star.

For Stephens, the opportunity to serve his country came without hesitation.

“I would encourage young kids to do at least one hitch in the military; it will definitely make them a better person, make them look at and enjoy life in a whole new way,” he stressed. “I love it; I love the chance to serve my country.”

When the opportunity arose to serve in another way, the one involving Jones, Stephens again didn’t hesitate to serve.

“When Mr. Jones called me about this, I was so honored,” Stephens said.

Farmer was drafted in 1969, was sent to Infantry training and one year later was in battle in Vietnam. He served a two-year tour of duty and left the military…but not for long.

“I stayed out two years and volunteered to go back in,” Farmer said.

The second stage of Farmer’s military career included an infantry unit at Fort Benning, Ga., Drill Sgt. duties at Fort Gordon, Ga., three years with an infantry unit in Germany, at Fort Jackson, SC as a Drill Sgt., and two years as an advisor for National Guard and Army in New York.

Farmer then enrolled in the Sgt. Major’s Academy at Fort Bliss, Texas. After reaching that prestigious rank, he remained there as an instructor for nearly four more years before retiring with 20 years of military service.

However, his calling as a military man was far from over.

Returning to his native Hertford County, Farmer spent the next 13 years as a Junior ROTC instructor at Hertford County High School, retiring in 2007.

“There’s no greater deed than to serve your country, to serve in defense of our freedom” Farmer remarked. “I enjoyed every day of it. I wouldn’t have retired had it not been for some heart problems.”

“It’s a way of life that I truly enjoyed,” Farmer continued while speaking of military service. “To do that you have to love your country, first and foremost.”

That country, particularly North Carolina, will now pay honor to Farmer as part of the state’s Veterans Park.

“It’s an honor and a privilege to be asked to do this,” he noted.

WINTON – In the event of an emergency situation, the quicker those possibly in harm’s way are notified, the better... read more