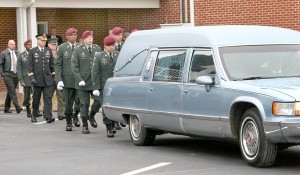 CONWAY – Will McLawhorn was remembered as a family member, a friend and a hero here Saturday.

Hundreds gathered at Conway Baptist Church to bid their final farewell to Sgt. Willie Atlas “Will” McLawhorn Jr. Saturday, days after he lost his life serving his country in Afghanistan.

A group of four men from Will’s life shared memories, love and pride as they talked about a young man who was born in Whiteville, educated in Northampton County and who died on the battlefield of a foreign land in service to the United States of America.

Stan Hyatt, who served as a Royal Ambassador’s (RA) leader at Western Prong Baptist Church in Whiteville, talked about the early years of Will’s life.

“I worked with the RAs and I loved those boys,” he said. “It’s an opportunity to plant seeds for their future. I hope in Will’s heart, I was able to do that.”

Hyatt said the boys at the church worked hard to learn to play sports and though they never won a championship, they were awarded the sportsmanship award, which for a Christian league was important.

“He made a difference in his 23 years,” Hyatt said. “I’m glad I was able to see him become the man he became. He’s a hero in my book.”

Michael Clemmons is a Sunday School teacher at Western Prong Baptist Church. He also served in the military and said he knew there were parallels between his service and that of Will.

“I have been a warrior for my country and now I want to be a warrior for Jesus Christ,” Clemmons said. “I pray for you (those in service) every day. I stand behind you and I would stand in front of you if I could.”

Clemmons said he and his wife were close enough to the Rev. Willie and Diane McLawhorn, Will’s parents, that they were sometimes able to keep Will and his sister, Melanie. He shared stories of their childhood and of babysitting.

“All of us today will have our own special memories of Will,” he said. “We’ll remember him as a child, teenager, young man or fellow soldier.”

Clemmons said things changed last week when Will was killed in the line of duty.

“In conflict, you have a point man who goes ahead to see what is waiting for the rest of us,” he said. “Will became my eternal point man who went ahead of me waiting for my arrival. I hope and pray that he is your point man too.”

Johnny Brown was Will’s high school basketball coach. He remembered a young man with extreme potential who lived up to it after joining the Army.

He said Will was a quiet, but fun-loving young man who often made people laugh.

“We clashed a lot,” Brown said of their time at Northeast Academy.

Brown remembered Will coming to him on Senior Night and giving up his starting position because the team had a chance to win the conference championship and McLawhorn wanted the normal starters on the floor.

After Will graduated, however, he and Brown became close.

McLawhorn did well in the Army, however, Brown said and his leadership ability was clear on his trips home when he visited with the Brown family.

“He was the man we knew he could be,” Brown said. “He gave the ultimate sacrifice for us to enjoy our freedoms.”

Staff Sergeant Eric Hanson, who was McLawhorn’s squad leader for much of his time in service, said Will was one of the best soldiers he had ever seen when it came to machine guns.

“I’ve been lucky that I’ve had the best machine guns in our battalion,” he said. “They have and will continue to save lives due to Will’s knowledge and skills that he shared with them.”

Staff Sgt. Hanson said Will was a person who drew his fellow soldiers to him. He said he was popular, wise and made good decisions.

“People of all ranks wanted to follow him and be with him,” he said. “There was no decision I made that I didn’t consult with him first.”

He said those who worked under Will were very proud to be his soldiers.

“They were one of the cockiest fire teams I’ve ever seen, but they could back it up,” Staff Sgt. Hanson said.

He said that Will was someone he loved like a brother and who he spent more time with than he did his own family.

“He is my dearest friend I have ever lost,” he said. “He will always be part of me and forever remembered by those who served with him.

“If there was one thing that I could change it’s that I would have been there with him,” Staff Sgt. Hanson closed.

Following his words, Brigadier General Rudeshiem spoke about Will’s service and in particular talked about the Bronze Star Medal.

After those words, Chaplain Foyou gave the Message, using Micah 6:6-8 as his Biblical reference.

Those attending the service left the church and walked across the street to Conway Cemetery where Will McLawhorn was laid to rest with full military honors.