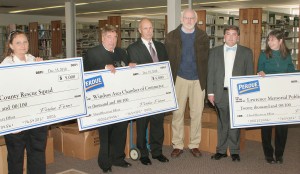 WINDSOR – Perdue backed up their reputation as a good corporate citizen of Bertie County last week.

“Our hearts broke when we saw pictures of the flood,” Hetherington said. “Perdue has been successful in this region because of the hard work and dedication of the people of Bertie County.

“That includes our associates at the Perdue Farms Lewiston processing plant and the Perdue AgriBusiness protein conversion plant in Lewiston, and the local farm families who partner with us to raise our chickens,” he continued. “With these grants, Perdue is building upon our ongoing partnership with the Bertie County community.”

Stalls said the company realized the impact on the community and also had some of its associates affected by the disaster.

“We realize the impact the flooding has had on the community and that’s why we want to be part of the rebuilding efforts,” he said. “I’m proud to work for a company that cares about people. I’m not surprised that the Perdue family and company want to help rebuild our community.”

He said the company had also done as much as it could to work with the associates whose homes were affected by the flooding.

“It’s not a given yet, but someday we’d like to see a library double the size of the existing one in a flood-safe area with amenities such as a room for children’s programs and a separate research room with a computer,” Hughes said. “We hope to use this grant to help furnish a new building with additional shelving and other library materials.”

Cooper said the grant would help the Chamber return to its location in the historic building on York Street.

“We’re in a historic building built in 1848,” Cooper noted. “It’s six feet off the ground and we were still under four feet of water (at the time of the flood.)”

Cooper said there had been other help from chambers in North and South Carolina, but that the Perdue grant would go a long way toward getting the Chamber back on its feet.

Godwin said she was also appreciative of the financial help.

“We completely lost our building,” she said. “We’ve had to gut the entire building and this will help so much as we try to get back on our feet.”

North Carolina Governor Bev Perdue sent a letter of appreciation for Perdue’s contribution that was delivered by Tate Johnson, director of the Eastern North Carolina Office of the governor.

“North Carolina is proud to have a committed community partner in Perdue Farms,” the Governor wrote. “This generous gift will help repair the Windsor Library as well as the Rescue Squad and Chamber of Commerce buildings, ensuring that these agencies can continue to serve citizens.

“Perdue Farms’ support of the Windsor community and communities across North Carolina is commendable,” the Governor added. “Our cities and towns are stronger because of your efforts today. It is my privilege to join (Windsor) Mayor (Jimmy) Hoggard, members of the town council and other elected officials, members of the Chamber of Commerce, Emergency Rescue personnel, Windsor library personnel and citizens in accepting this generous gift.”

Harrell said he was appreciative of Perdue’s commitment to the community.

“I appreciate the work Perdue has done in aiding these three institutions and thereby helping the citizens of Bertie County,” Harrell said. “I think these institutions are beneficial to all our citizens and I’m appreciative of Perdue’s commitment to them and to our county.”

“We are sincerely appreciative of Perdue’s commitment to our community,” he said. “Perdue is an important part of Bertie County. I’d hate to think of Bertie County without them.

“This donation to three very worthy organizations will be greatly beneficial to them and to the town,” Castelloe continued. “I and the members of the town government are grateful for their generosity.”

“Obviously, any time you have a private enterprise that cares about a community, it’s a wonderful thing,” he said. “These three institutions do so much for our community and they were all hit hard and Perdue’s support of them is greatly appreciated.

“I’m very pleased with their help, but not at all surprised,” he added. “They have always been good corporate citizens.”

WINDSOR – An initiative of Chowan University is helping math teachers in Bertie, Hertford and Northampton counties. During this month’s... read more