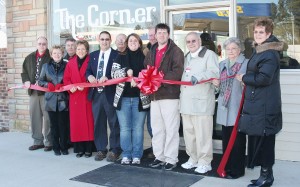 CONWAY — A new restaurant here has already become a hit with the locals.

On Tuesday, The Corner Tavern & Grill was officially christened in a ribbon cutting ceremony as the latest business to open in Northampton County.

“We’re really excited about it,” said Bolton. “Everything we’ve heard about it is good.”

The Corner, located at 137 E. Main Street, is owned by Katherine Ward and Will Mayle and offers customers a variety of dishes, from chicken wings to salads to 12 oz. rib eye steaks in the restaurant’s newly re-modeled environment.

Mayle, a Conway native, was vocal in bringing the restaurant to his hometown. He and Ward have been friends for sometime and she was looking to expand her already established restaurant business. The Corner in Conway is one of four locations around the region, which includes Cary, Raleigh and Virginia.

“I love it, I think it’s awesome,” said Mayle about the restaurant, which officially opened November 20. “We’ve never had anything like this in Conway.”

However, before the restaurant could open the building had to be completely gutted and remodeled. With some help from Watson’s Builders, the two and a half month renovation resulted in a sleek contemporary dining area and bar that boasts seven flat screen televisions.

Ward described the atmosphere as a family restaurant and tavern.

Another feature that will most likely be popular with customers during warmer weather is a fenced in patio area.

“With a small space we had to work with what we had,” said Ward.

She added the outside can be tented off for parties.

Among the items on the menu are an array of salads, burgers and sandwiches. Entrees boast such dishes as grilled Mahi Mahi, jerk chicken as well as shrimp and grits.

The Corner also offers a signature appetizer called Tavern Tots which is a mixture of apple wood bacon, cheddar cheese and green onions.

“It’s a little ball of goodness,” said Ward. “It’s our version of a tater tot, but better.”

Next week, Ward said, the restaurant will begin $5 lunch specials with a different dish featured each day.

RALEIGH – In their most recent meeting, the Hertford County Board of Commissioners voted to adopt a resolution that will... read more