CONWAY – The Rev. Willie McLawhorn has spent more than a decade preaching the love God has for his people at Conway Baptist Church.

In the days since the tragic death of their son, Sgt. Will McLawhorn, Willie and his wife, Diane, have received an outpouring of that love through the people of Conway, Northampton County and the Roanoke-Chowan region. 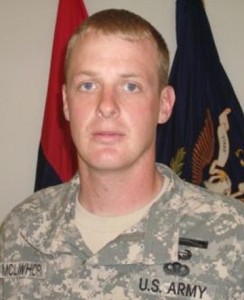 Sgt. Will McLawhorn of Conway and five of his U.S. Army comrades were killed Sunday by a suicide bomber.

“The outpouring of support from the community has just been overwhelming,” Rev. McLawhorn said Wednesday afternoon. “Sunday night people were here almost immediately. We’ve received so many phone calls and messages of support, it has been amazing.”

Sunday night, a notification detail from the United States Army drove up at the McLawhorn’s home in Conway to notify them that their son had been killed in action.

“They didn’t have to tell us,” Rev. McLawhorn said. “When you see two of them drive up, you know what they’re there for. That was the hard part.”

Sgt. McLawhorn, 23, was one of six soldiers killed by a suicide bomber in Afghanistan Sunday morning.  He was serving in the 101st Airborne Division, 2nd Brigade Combat team when he was killed in the line of duty.

“As a parent of a soldier, especially one in a combat zone, you know this is a possibility,” Rev. McLawhorn said. “Will knew that too. We talked about those possibilities.”

A standout student-athlete at Northeast Academy, Will McLawhorn played basketball and baseball during his prep career. He graduated from Northeast in 2005 and then joined the U.S. Army in November of 2006.

After being notified that they had lost their son, the McLawhorns were flown to Dover, Delaware to meet the plane bringing Will’s body home.

“That was a wonderful service,” Rev. McLawhorn said. “The Army was very good to  us, they made all the arrangements, took care of us while we were there and then flew us home.”

“It was a very cold night when the bodies arrived, but they treated us very well,” Rev. McLawhorn said. “We have nothing but the highest regard for the jobs they do.”

Upon their return, the McLawhorns were greeted by ribbons and flags throughout Conway.

“When we got back, every telephone pole had a flag and ribbon on it,” Rev. McLawhorn said. “They put a wreath at the Veteran’s Memorial Park in Conway and they lowered the flag to half staff.

“Will bought a brick with his name on it as part of the park,” he added. “That’s been set up kind of as a memorial. The outpouring of support from the community has been just overwhelming – that’s the only way I know to describe it.”

The funeral services are still in limbo, but will likely be Saturday at Conway Baptist Church. At that time, Rev. McLawhorn said he and the family are anticipating a large turnout because of all the support they have received.

“Diane has a wonderful work family that has been so supportive and all of my pastor friends have been there for us,” he said. “Northeast and the other schools that Will played against have just been wonderful.

“We are deeply appreciative for all of the love and support,” he closed.

JACKSON — Conway Middle School will be getting a new roof over the gymnasium as well as new lockers while... read more