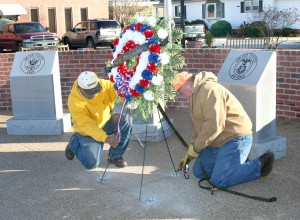 CONWAY — It’s not hard to see Conway is a community in mourning.

Yellow bows line the street; a wreath stands in front of the Veterans’ Park; the American flag at half-mast—all in remembrance of Will McLawhorn and in support of the fallen soldier’s family.

Most who live here agree Conway is a tight-knit community that takes care of its own.

“That’s the thing about small towns,” said Art Watson of Watson Builders. “They stay together and work together.”

On Tuesday afternoon, Watson along with his son, Ben, and Jamie Vaughan secured hooks in the ground of Veterans’ Park to help hold down a wreath bearing McLawhorn’s name. Conway Town Council members agreed to place the wreath at park in honor of McLawhorn.

When Watson, a member of Conway Baptist Church where Will’s father, the Rev. Willie McLawhorn serves as pastor, heard the news of McLawhorn’s death he felt the need to do something. So he went across the street to the Veterans’ Park and lowered the three flags to half-mast.

“It shows (the family) support,” he said. “I hate for them to have to go through it. They’re not alone.”

As Watson placed the wreath at the site, Jesse Hood, who happened to be passing by, pitched in. Hood said he is a military veteran as well as a neighbor of the McLawhorn family.

Many Conway residents are showing their support with different types of gestures. Each yellow ribbon that is placed around town comes from a person with McLawhorn on their minds and in their hearts.

Local florists have been busy creating the ribbons, which Conway Town Administrator Nancy Jenkins said the town is seeing to that each one is placed somewhere around town.

Conway Mayor Brian Bolton said on Wednesday 90 more ribbons are being put up between now and Saturday. In nearby Murfreesboro yellow ribbons have also been appearing around town in mutual support.

Bolton attends Conway Baptist Church and his eldest daughter dated Will in high school and went to prom with him.

“Will was a fun-loving kid and he wanted to make something of himself,” said Bolton. “He was a funny guy, good with one-liners.”

McLawhorn often called referred to himself as a “PK” or “preacher’s kid” and often without knowing it, Bolton said, McLawhorn taught the young people around him those lessons instilled in him. McLawhorn was a graduate of Northeast Academy in Lasker and was an avid sports player.

“He was a typical teenager, he loved to hunt and fish, he was a wonderful marksman,” said Bolton.

“He was probably one of the best shooters in his group,” said Bolton.

Bolton noted McLawhorn is just one of many who have fallen during the war in Afghanistan.

“Will was a soldier, an Army guy, but more than that he was a good guy,” said Bolton. “He was a man’s son trying to do something right.”