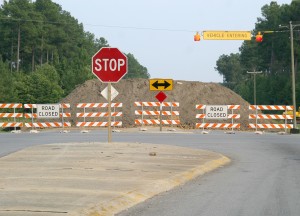 NCDOT converted the NC 11 & 11 intersection near Ahoskie to a “T” configuration in August of this year.

WINTON – From questioning the tactics of a local state representative to their own divide on the issue, the Hertford County Board of Commissioners engaged in a lively debate over the NC 11 & 11 intersection at their most recent meeting.

In the end, the board, in a 4-1 vote, opted to adopt a resolution that will ask the North Carolina Department of Transportation to remove the dirt mound on the east side of the highway junction, completely re-open the intersection and install a stoplight.

Back in August, DOT transformed the intersection from a crossroads to a “T.” That came after years of vehicle accidents (140 since 1990, five of which were fatal) despite several attempts by DOT to improve safety there, including better visibility as well as several variations of warning signs and signals.

After DOT made the change, the Hertford County Commissioners were concerned over why they were not included in the discussion over the transformation. Some board members were also not pleased with the dirt pile, calling it an eyesore.

Board members met with District 4 State Senator Ed Jones and District 5 House of Representative Annie Mobley in an attempt to lobby the two state legislators to ask DOT to take another look at the changes.

“Senator Jones told us at our meeting that he would work on getting a stoplight there and he has since come back and said he wanted something in writing from the commissioners requesting the changes we want and he would take it to the DOT Secretary and ask them to go back and put a stoplight at 11 and 11,” said Commission Chairman Johnnie Ray Farmer at the Dec. 6 meeting of the board.

Farmer added that DOT Division One Engineer Jerry Jennings said they were planning on operating the 11 and 11 intersection the way it was currently configured for one year and then reevaluate the changes recently made at that busy junction.

“They could make it a permanent ‘T’ intersection or do something different based on the number of accidents there or if the accidents shifted to the Modlin Road intersection,” Farmer said.

“I’ve said this once and I’ll stand fast to what I said – we need to open 11 back up, move that pile of dirt, put a stoplight there and call it a day,” Commission Vice Chairman Curtis Freeman remarked. “Every accident that was at that intersection was not because of the intersection itself, rather it was human error. I still have problems with DOT closing our roads off and putting up a pile of dirt.

“We have a duty to our citizens,” Freeman continued. “(The current configuration) has inconvenienced our citizens. I can’t see any reasoning for what they did. Somewhere along the line, one person or two went to DOT and said they wanted something done. As always, state agencies tend to listen to certain people rather than a majority.”

“I don’t like it, but, safety wise, it’s working right now,” Commissioner Howard Hunter III said. “If DOT is going to leave 11 and 11 like it is they need to move the mound of dirt and put a guardrail up.”

While Hunter noted the lower number of accidents at 11 & 11, he was concerned about the volume of traffic that has shifted to other roads.

“I still feel the accidents there will be moved to another intersection,” he stated. “If you go down Benthall Bridge Road by the community college all the traffic is going that way; it’s a disaster waiting to happen. Union is a bad intersection and then there’s the intersection there at Duck Thru (NC 561). Modlin Road is congested now; I don’t even go that way anymore.”

Without calling names, Hunter responded by saying, “One of our elected officials acted like they didn’t remember talking to us about this issue. The other said bring a resolution from this board.”

“Jones said he could have that (stoplight) done right away,” Freeman recalled. “Right away seems to be nowhere. Have things changed since he was just reelected or is there some other catalyst that is causing him to change. In the original meeting he said nothing of a resolution or a letter.”

“I can clarify that a little bit,” Farmer responded. “We have talked about the fact that nothing has been done and he (Jones) said he could take care of it. Commissioner (Bill) Mitchell talked to him and asked him about the status (of the stoplight) and had he done anything. He (Jones) apparently went back to Raleigh and spoke to someone at DOT; he then called me and said he needed something in writing from the commissioners. I don’t know if DOT asked for something in writing or if he just decided he needed something in writing. His request was we send him a resolution or letter of support for putting a stoplight there and he would proceed in that direction.”

“We did, at the request of the board, talk to Senator Jones (during a Nov. 16 visit by Lt. Gov. Walter Dalton to Roanoke Electric Cooperative, an economic roundtable discussion attended by the senator) as to what the hold-up was,” Hertford County Manager Loria Williams said.

“Are we proceeding with this resolution or are we now doing something different,” Gatling inquired.

“I think we’re talking about getting a resolution together,” Hunter noted.

“When this first happened and DOT came before us, I think we as a board were very disappointed that DOT had not notified us or getting some information from local officials, such as the Highway Patrol, the Sheriff’s office, the commissioners, etc,” said Mitchell.

“We all reserve the right to change our opinion,” he continued. “When we had that first meeting with DOT, personally I thought, evidently as did everyone else because we told our senator to have a stoplight put at 11 and 11, that we wanted a light there. Personally I thought that was needed. Correct me if I’m wrong, but I don’t think we’ve had anything major happen there. (Without major accidents at 11 & 11), now my mind is saying that if we put the pressure on to put a light there, and when the light is there we have a major accident, did we make the right decision? Did we ask them to move that mound of dirt simply for aesthetics, how it looks, or did we do the best thing in our hearts for our constituents. The primary thing about that mound of dirt is safety. It’s ugly, however, it has greatly reduced the accidents at that intersection.”

“What does the dirt have to do with a barricade, don’t they have other ways to put up a barricade,” asked Gatling.

“The dirt was put there because it was the least expensive way to block the vision of the driver that was approaching the stop sign,” Mitchell explained. “DOT thought that drivers were looking too far down the road and that was causing the human error accidents. They said they would come back after 12 months; if we’ve not had any serious wrecks it would prove that this was a fix to the problem. They would move the dirt at that time; plant trees; come-up with a different type of barricade…that’s what I understood them to say.”

“What’s the purpose of the dirt; you may can look through a regular barricade, but are you going to drive through it,” Gatling noted.

“I am tired of people in Raleigh, DOT, and everybody else making decisions for our county without including this board,” Freeman continued. “That’s what wrong with things now…they know what’s best for us. If we’re going to start sitting back and let other people make decisions for our county without including us then we all need to step off the board and let the state run Hertford County.”

“If any of you haven’t driven the alternate routes (around 11 & 11 intersection), drive them during school hours, the alternate routes are terrible, especially around the community college,” Hunter said. “Would I like to see 11 opened back up, yes; but what I really want to see is that mound of dirt gone and some other type of barricade put there.”

“Let’s make up our minds what we want…I don’t want to see that dirt; I see no purpose for that dirt,” Gatling said. “Do you want to open it up or do you not want to open it up; that’s a simple question. Don’t call people down from Raleigh and tell them want you want and then turn around and discuss something else. We sit here and talk about Jones; he should be talking about us. That’s crazy. He’s sticking his neck out there and then we sit here and talk about something else. That don’t make sense. Let’s make a decision.”

“Senator Jones called me; I didn’t call him. He is the one that said he needed something in writing,” Farmer noted.

“I’ll make a motion right now that 11 and 11 be opened back up because I don’t see the need to move a problem from one intersection to another,” Freeman suggested.

Freeman then asked if a resolution had been drafted, to which Williams produced a copy. It basically stated that the Hertford County Commissioners believe the closing of old NC 11 is not sufficient and that it has created a higher volume of traffic hazards. The resolution also calls for the removal of the dirt barrier and the installation of a stoplight at NC 11 & 11.

“I move this resolution be adopted,” Freeman said after asking to review the wording.

“We’ve never had a stoplight there (11 & 11) so DOT can’t say if one wouldn’t work there,” Freeman stressed. “I would hate to see anyone get killed at any intersection, but if it’s because of someone’s negligence, then we can’t help that.”

Gatling then seconded the motion, adding that he wouldn’t mind a compromise on the issue at hand.

“There’s not many accidents there, but when there is an accident, it’s a bad accident,” Hunter observed.

Upon calling for a vote, Freeman and Gatling both cast “aye” votes with Farmer voting against. Hunter and Mitchell were both silent during the voting process. By meeting standards, the lack of a voice vote means that person, or persons in this case, are recorded in the minutes as a “yes” vote.

WINTON – Before the first shovel of dirt is turned on the new Hertford County Judicial Center (courthouse), plans are... read more