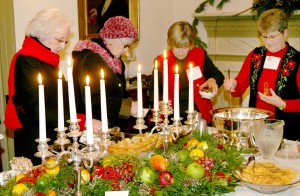 Patrons of the 25th annual Murfreesboro Candlelight Christmas Tour sample some of the delicious food offered at the Roberts-Vaughan House, one of 12 stops on the tour held throughout the town Thursday and Friday nights. Staff Photo by Amanda VanDerBroek

MURFREESBORO — Since it began, the Murfreesboro Historical Association’s Candlelight Christmas Tour has treated visitors from all over to the sights and sounds of the historic gems the town has to offer.

On Thursday and Friday evening (Dec. 9-10), the Candlelight Christmas Tour once again lit up the streets of Murfreesboro. The progressive dinner offered tour-goers 12 historic stops around town.

This year the tour had its visitors creating holiday memories amongst silver bells— the theme with a nod to the event’s silver anniversary.

According to Historical Association President John Woodard, the tour began 25 years ago, the same year as the Watermelon Festival, another popular event organized by the association, as a way to raise funds.

Woodard said this year’s ticket sales were average. He added the event would be impossible without the help of the 180 volunteers that help with the tour start to finish.

“(It’s successful because of) our wonderful volunteers,” she said.

The tour featured stops at the Roberts-Vaughan Village Center, The Brady C. Jefcoat Museum and Chowan University. The event also took visitors to stops within the historic district, including the Murfree-Smith Law Office/Gift Shop, the Agriculture and Transportation Museum, the William Rae Museum, the Evans Tin Shop, the Winborne Country Store, the Vincent-Deale Blacksmith Shop and the Wheeler House. It concluded with a visit to the Murfree Center for dinner and the Hertford Academy.

Annemarie and Lloyd Hetzel of Washington decided to attend their first Candlelight Christmas Tour after hearing about it through a senior citizen group they are involved in.

Hetzel said what attracted her to the tour was the history and for simply “something to do.”

“We thought it would put us in the Christmas mood,” she said.

For Jaquie and Ike Pipkin of Pine Knoll Shores it was their first Candlelight Christmas Tour as well, despite Mr. Pipkin being raised in Murfreesboro.

Pipkin remembered playing as a child in many of the historic buildings now owned by the Historical Association.

A relative invited the couple to take the tour, which Pipkin said was teaching him a lot about his hometown community.

“When you grow up here, you take it for granted,” he said. “You don’t realize how historic it is.”

AULANDER — One of Aulander’s and the Roanoke-Chowan area’s most beloved citizens has completed their earthly duties. Elizabeth Cox Jenkins Steimle... read more