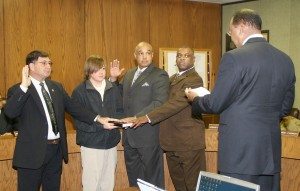 WINTON – The same faces are in the same places.

As part of their regularly scheduled meeting here Monday, the Hertford County Board of Commissioners are annually charged with the task of appointing those that will provide leadership. Apparently, the board was satisfied with the two men currently filling those roles.

Charles “Chuck” Revelle, who serves as legal counsel to the commissioners, opened the meeting in order for the board members to conduct their organizational effort.

The floor was open for nominations for board chairman, to which Howard Hunter III motioned for Johnnie Ray Farmer to continue in that role. Hunter’s motion was seconded by Bill Mitchell and passed by unanimous vote.

As for vice chairman, Mitchell nominated Curtis Freeman, who took over that position earlier this year upon the death of former vice-chair Dupont Davis. Hunter seconded that nomination and Freeman was approved without objection.

“Thank you to the citizens of Hertford County for re-electing me as your county commissioner,” Farmer said shortly after re-claiming the board’s lead chair. “Thank you also to my fellow commissioners for electing me again as your chairman.”

Freeman also thanked the voters for returning him to office and for the confidence of his board colleagues to continue to serve them as their vice chairman.

“This is a job I do not take lightly,” Freeman noted. “Thank you for your confidence in me and I plan on doing the work of the people just as I always have.”

Prior to the election of chairman and vice chairman, Farmer, Freeman and Ronald Gatling, each winners in the November General Election, received their oath of office from Resident Superior Court Judge Cy Grant. Farmer and Freeman were elected to four-year terms. Gatling’s term is for two years to fill out Davis’ term.

WINTON – As Hertford County local government proceeds with plans to offer recreational venues and programs for its citizens, they... read more