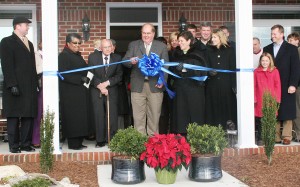 Flanked by members of the Britton family and others, Baptist Children’s Homes of North Carolina President Michael C. Blackwell cuts the ribbon that formally opens the organization’s new facility in Hertford County, the first of its kind in the northeastern part of the state. Staff Photo by Cal Bryant

AHOSKIE – Sunday afternoon’s bone-chilling cold wind proved as a stark contrast of what awaits the first wave of children who will soon call 418 Menola-St. John Road as home.

Bundled against the cold, a large crowd – representing churches from each county in the Roanoke-Chowan area – gathered at that address to formally dedicate the Britton Ministries Group Home, part of the Baptist Children’s Homes of North Carolina (BCH).

Following the brief outdoor ceremony, which included a ribbon cutting, those in attendance sought shelter from the cold inside the eight bedroom home, one that soon will provide a warm, caring environment for children that are products of abuse.

Just eight short months ago, the land stood bare, but the dream to place a BCH in Hertford County was about to become a reality.

Thanks to a donation of 16 acres from the Britton family and the monetary contributions of area churches, the $750,000 project began to take shape almost immediately following an April 22 groundbreaking. Construction began April 29, a process completed in only four months.

On Sunday, state and regional BCH officials joined with the Britton family and local churches to see the finished product, one that will begin to provide home to local children early next year.

“I have come to love and respect the members of the Britton family,” said BCH President Michael C. Blackwell in his opening remarks. “I appreciate so much them carrying out what they thought would be something that would be in keeping with the love and the ministry of grandmother Britton.”

John Pond, Director of Missions of the West Chowan Baptist Association, in the opening invocation, said, “Our prayer today is that this home will become a unique place of healing and wholeness; compassion and encouragement; strength and comfort. We ask that the ministries accomplished here will bring refuge and respite to each who come under its embrace. We ask is that this piece of land and facility, as a children’s home, be a cause of gracious promise and saving peace for all that enter and abide.”

The podium was then turned over to Malinda Britton Schantz and her mother, Mary Anne Britton Croom, as they gave reflections of the efforts to bring a Baptist Children’s Home to Hertford County. Ironically, it was a Hertford County native, nine-year-old Mary Presson, who was the first child admitted into BCH’s care back in 1885. She was placed at the BCH’s first home in Thomasville.

“It’s so great to see this beautiful place; it’s nicer than I ever imagined,” Schantz said. “I hope that the children and adults who live here are blessed by the love and kindness of everyone in the community and by the love and peace of God.”

Croom noted that Sunday’s ceremony was connected with Presson.

“Yesterday (Saturday) was Mary Presson’s birthday,” she said. “Tomorrow (Monday) is the anniversary of her death. Today (Sunday) is between those two days….that’s a God thing, that’s a God thing.”

Croom admitted that she would visit the worksite at least twice a week, sometimes more, in an effort to document the construction of the home through photographs.

“I kept imagining at that time, if I were a child, what would I think when I opened that door,” she remarked. “What would I think of my new home? At this season of the year, all I can think is that I hope these children find love, hope, joy and peace. This is what this house represents.

“This is holy land on which you stand and I thank each one of you that have come in person and those who are praying with us today to make this possible. This is for the children of God and we are so glad that God asked us to be a small part of it,” Croom concluded.

Fighting back the tears, Jeff Joyner, BCH Eastern Area Director of Development, said that so many of those in attendance at Sunday’s ceremony had become like family.

“This means so much to me personally; to watch this home take shape; to work side-by-side with you, to get to know you and love you,” Joyner remarked. “So many of you have been here with me, working, crawling on the ground to lay the sod, digging holes and planting trees; cleaning up inside.”

Joyner continued, “Even though the home is built, the work is just beginning. The ministry doesn’t stop; our Lord and Savior walks with us every day until he calls us home. We are the workers; we are God’s building. We will love these kids and give them the same hope we received when we ask God to be our savior because that’s what we do at Baptist Children’s Home. We ask those in this community that when you see a child that needs help, know that there is now a place that can help, this home.”

Blackwell made reference to one of the most famous sports phrases ever to air on TV. It came during the 1972 Winter Olympics where the American hockey team was playing the mighty Russians in the semifinal round. Despite being the underdog, the Americans found the will to win, prompting TV announcer Al Michaels to say, “Do you believe in miracles?”

“I can give an answer today to that…yes,” said Blackwell. “I want to thank all those churches represented here today for your gifts to build this facility because you do believe in miracles.”

Also taking part in Sunday’s ceremony were Johnnie Ray Farmer, Chairman of the Hertford County Board of Commissioners, and Sandra Perry, BCH Eastern Area Family Services Director. Remarks were read from Ahoskie Mayor Linda Blackburn who was unable to attend due to medical reasons.

The local BCH, the first of its kind in the northeastern part of the state, is licensed to be the home of nine children, each referred to the residence by the Department of Social Services. The children – who will help with household chores – are required to attend public school.

Inside the Britton Ministries home are two “house parents” rooms, each with its own private bathroom. Those “parents” manage the facility and offer a home environment for the youngsters. They work in two-week shifts (two on, two off). In addition to their numerous duties they are required to fill out daily paperwork on each child, tracking their progress within the home environment as well as their schoolwork.

The home also includes a case worker, hired by BCH.

BCH has 19 campuses across the state. The youngest resident currently in such a home is two months old…they can remain until age 18.

Additionally there are “transitional” homes within the organization, meaning a child can remain there after graduating from high school and are waiting to enter college or the workforce and are without housing until the next stage of their life begins.

As a nonprofit, BCH depends on the generosity of churches, individuals and other organizations to meet the needs of the children. Community churches, donors, and other businesses have helped make the new home possible.

The Ahoskie community and its Baptist churches that comprise the West Chowan Baptist Association have historic ties to BCH’s beginnings in 1885. The association, originally a part of the Chowan Association before splitting into two entities, was the first to contribute funding for BCH. The Chowan Association gave $1,500 to help build Mills Home, BCH’s first residential campus in Thomasville.

Among the many highlights of the Murfreesboro Candlelight Christmas Tour is a progressive dinner featuring delicious treats at each stop.... read more