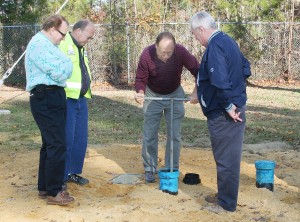 Murfreesboro Town Councilman Bill Theodorakis said those words as he turned on the newest line extension to the town’s water system.

A $284,000 project was recently completed, extending the 12-inch water line 3,600 feet from Union Street (near Chowan University) to the elevated water tank on Tower Road. Additionally, section one of the project replaced 1,300 feet of a six-inch troublesome water line on Wynn Street (from Broad Street to the town limits) and is already in service.

Turning on the new Union Street extension not only marked the completion of the water line project, but concluded a milestone for town officials.

Byrd said the extension will take care of water pressure issues in the southeastern part of town, namely with Chowan University. The line will also increase fire protection capability and also allow for further extension on Union Street

“We needed it a long time ago,” said Hinton.

He noted how the new water line extension will help the university expand.

“By putting in this water line it will allow Chowan University to move south and allow us to develop another part of property,” Hinton said.

The Wynn Street portion of the project has replaced a troublesome line that over the years has experienced a lot of breaks and repairs.