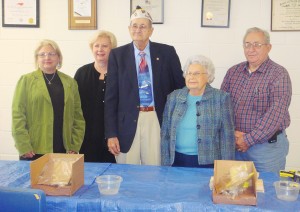 As was his wish, Cecil Taylor (center) chose four individuals to share the honor of his inclusion on the North Carolina War Memorial. From left are his daughters Vickie Taylor and Arlene Gaither, his wife, Lillian Taylor, and his best friend, Tom Powell. The memorial is scheduled to be unveiled July 4, 2011. Photo by Tara Kinard

GATESVILLE – “How long did they say I had to sit like this,” asked 90-year-old Cecil Taylor as he sat, arm dangling at his side, having his hand cast in bronze.

Taylor, an Army veteran and Pearl Harbor survivor, was selected to represent Gates County in the war memorial which will open July 4 of next year at Fort Bragg in Fayetteville. This memorial will consist of one veteran from each county in North Carolina (and will include their hand print as well as a soil sample from their respective counties) and each inductee will be given the opportunity to choose four individuals who have supported them over the years, whose hands will also be cast in bronze.

Tom Powell, a retired Army Sergeant Major, was one of the four people Taylor decided to share his honor with.

“Anytime I holler he’s right there,” said Taylor. “I just couldn’t have figured no one else that had been as good to me as Tom had.”

Taylor explained that they had really become close following the death of his son-in-law, who Taylor described as his “handicap man”, his best friend.

“Tom took his place; he drives me everywhere, we have done a lot of projects together, work together — he’s really like a son.”

The gentlemen’s latest project, “The Roster of Veteran’s of Gates County,” chronicles the name, branch, rank, war (if applicable) and other details of every Gates County war veteran dating back to the American Revolution.

“Each year on Veteran’s Day we add to it,” said Taylor.

The other three honorees chosen by Taylor were his wife, Lillian, 88, and his two daughters, Arlene Gaither and Vicki Taylor.

“I have a time with three women, but I don’t know what I’d do without em’,” said Taylor.

And what a time it has been. Come March, the Taylors will have been married for 67 years, a rarity by today’s standards and their love story is one for the ages.

“I met my wife on a beautiful Sunday afternoon, she was a senior in high school.” said Taylor. “I made a date with her for the following Saturday, but before Saturday night came I was on my way to Hawaii.”

That Sunday afternoon encounter was the only time the couple had seen each other, yet they corresponded through letters for the next five years. He even sent her a graduation present — a grass skirt.

“When I got out (of the Army) I went straight to her,” said Taylor.

His wife, by this point, was residing in D.C. and was employed by the Treasury Department. They married, and both being natives of North Carolina, returned home. The rest, as they say, is history.

It was Taylor’s five years of service as a soldier in the Army that earned him a spot at the memorial. During those tumultuous military years he saw a lot of action, with the most significant being his presence at Pearl Harbor on December 7, 1941. According to Taylor, on December 6 the whole outfit had been moved out and gone to the city -with the exception of the football players and those about to be discharged, which included Taylor.

“We celebrated all night — we lived it up because we knew we’d probably never be back,” said Taylor. “Driving back to our base, the taxi driver brought to our attention how beautiful the harbor was that morning, but I didn’t want to see anything but the bed after being up all night.”

He did, however, notice that the planes overhead were bundled up like little “ant hills”, which he later learned was due to the fact that they were better protected in groups as opposed to scattered about.

Finally making it back to his housing, Taylor went upstairs, undressed, and crawled into bed just as the first explosion sounded, shaking the earth’s foundation. Initially, Taylor thought a volcano had erupted, having experienced that in Hawaii and knowing that they can cause tremors, even on neighboring islands. Hearing the commotion in the streets, however, Taylor quickly realized that this was no volcano.

As quickly as Taylor had stumbled into the bed he was scurrying back out, making his way to the roof for a better view.

“I got to the top of the building and looked out to see bombs being dropped,” said Taylor, describing the scene as one of red blaze and smoke.

In the midst of watching the action unfold, another plane caught Taylor’s eye as it was flying unusually low, and slowly.

“We were looking at the bombs dropping and him about to crash,” said Taylor.

As the pilot flew overhead of Taylor and a fellow soldier standing by his side, he looked down and waved at them; they returned the gesture with a thumbs-up, not knowing they were encountering the enemy.

“We didn’t know anything about the rising sun then (referring to the painting under wings), we thought it was one of us,” said Taylor.

The plane circled back and fired at Taylor and his friend. “He being slant-eyed, missed” said Taylor. “But that’s when I found out I could have won a gold medal in the 100-yard dash.”

The rest of that day, and the next several days, were spent in chaos — not fully grasping what had taken place, trying to maintain order in the streets, and preparing to defend themselves against any further attacks they may face, having limited resources.

“Nobody had any ammunition, but everybody had a gun and we expected to be attacked by the Japanese Army,” said Taylor.

The ammunition supply was significantly diminished by the bombings, as it was stored on the boats. When the bombs hit the ships, coupled with the ammunition on board, the resulting explosions destroyed everything.

“You couldn’t even see a ship for smoke,” said Taylor.

After regrouping, Taylor’s squad leader gave him back his men, a jeep, a driver and a sawed-off shotgun with a bayonet and ordered him to disperse any people gathered in the streets. There was a fear, as most of the population was Oriental, that they were exchanging sensitive information or perhaps even plotting further devastation.

Taylor remained in Hawaii one year to the day, December 7, 1942 before boarding a boat to Italy, where he would encounter more combat, more loss, and more close calls on his own life. There was the battle of the hills: Marines would come and take the hills during the day and the Japanese would take them back at night. Thus, as is the case with war, there was a constant state of back and forth, that is until the Japanese Army temporarily got the best of the situation.

“Our boys started up the hill, but the Japs were cutting them down so fast that they withdrew and came back down,” said Taylor. “The medics were dragging the dead, crippled and wounded off the hill. And then came the Air Force — bombing.”

When things had finally appeared to settle down Taylor’s sergeant sent him up to scout the hill.

“All I saw was the remains of a few marines,” said Taylor.

While in Italy, Taylor contracted yellow jaundice, and then malaria.

“They put me in what you call the dying tent, and that didn’t feel good either,” said Taylor, “but I guess they figured I had outlived them.”

Taylor was shipped to another hospital in New Zealand; he was in and out of various hospitals for the next year.

“I came out as free as a bird and never regretted my time in the military,” said Taylor.

Years after being discharged from the military Taylor attempted to contact those he had served with.

“I always wondered where my friends ended up.” said Taylor, who quickly found this to be a difficult task.

Most had moved, or died, some never retuned from oversees. Finally, Taylor wrote the post master, explaining the situation and asking of any available information. And he got a response, a phone number for Elliot Trap, or Curly, as they used to call him. Taylor called and upon asking Trap if he knew who he was, was shocked to hear, “yes, it’s Cecil Taylor.”

“Curly, how did you know it was me? It has been fifty, sixty years,” asked Taylor.

“I just retired from the post office,” said Trap.

At 90-years-old, Taylor has a better memory than most, and is easily able to recall his experiences, not only in the military, but throughout his life. His family describes him as a happy-go-lucky guy and the “social butterfly” of the family.

“He dressed up every holiday…and he still does — he can get up and dance better than any of us,” said Vicki Taylor.

Taylor started the Hall Ruritan Club; he is a deacon at Cool Spring Baptist Church; member of the Gatesville Lodge and involved with several other organizations.

And, as of July 4, 2011, he will proudly represent Gates County on the North Carolina War Memorial.

AHOSKIE – Santa will not be the only dignitary riding in the 2010 Ahoskie Christmas Parade. Jolly Old St. Nick... read more