AHOSKIE – Santa will not be the only dignitary riding in the 2010 Ahoskie Christmas Parade.

Jolly Old St. Nick will be featured in his traditional spot – bringing up the rear of the annual parade – while one of the lead entries will feature Adrienne Leigh Core, the reigning Miss North Carolina. 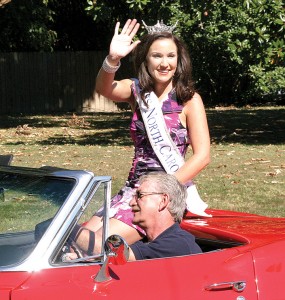 Adrienne Leigh Core, the reigning Miss North Carolina, waves to the crowd gathered along the parade route of this year’s Ahoskie Heritage Day. Core will return to Ahoskie on Dec. 11 to serve as the Grand Marshall of the town’s Christmas parade, scheduled for a 10 a.m. start on Main Street. Staff Photo by Cal Bryant

Core, who will serve as the event’s Grand Marshall, and Santa will be part of the Roanoke-Chowan area’s largest Christmas Parade, one scheduled for 10 a.m. on Saturday, Dec. 11. The parade route will travel, west to east, along Main Street, turn onto Catherine Creek Road (in front of the Roanoke-Chowan News-Herald office) and then to Sunset Street.

Those interested in participating in the parade are urged to immediately contact the Ahoskie Chamber of Commerce at 332-2042.

Raised in Erwin, NC, Core excelled in academics as well as sports. She also found time to dance and developed a love for clogging, North Carolina’s official state dance, when she joined the NCSU Clogging team, of which she served as President during her junior year.

A leader in the classroom as well as on the playing field, Adrienne credits any success that she has achieved to the strong foundation provided by her parents, Beverly Core and the late Charles Core. Adrienne believes in being true to her faith and above all, embodying the Southern grace of a positive role model for young women today.

The V Foundation is close to Adrienne’s heart as she lost her beloved father to Multiple Myeloma when she was 18 years old just before graduating high school. As Coach Valvano said in his famous ESPY speech, “don’t give up, don’t ever give up,” Adrienne’s dad lived his own life in that same fashion, never allowing the ravages of his disease to interfere with his intentions of living life to the fullest. Adrienne has that same desire and strives to do everything possible to raise funds for cancer research as well as the Children’s Miracle Network so that each and every individual might have the opportunity to have a long and happy life.

WINDSOR – Bertie County Schools is seeking input from its stakeholders. The Bertie County Board of Education is currently in... read more