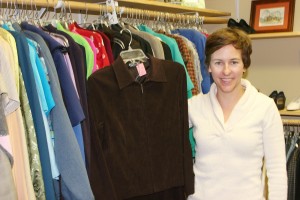 Opportunity Shoppe Manager Elizabeth Spruill displays a small portion of what the thrift store, located on Granville Street in Windsor, has to offer. Staff Photo by Thadd White

WINDSOR – The Opportunity Shoppe is once again reaching out into the community.

Recently, the Shoppe – which is operated by St. Thomas Episcopal Church in Windsor – received two grants to allow them to provide “Bargain Bucks” for those in need of assistance.

“The program is designed to provide at-risk women and children with basic necessities during a time of need,” Opportunity Shoppe Manager Elizabeth Spruill said. “It’s a one-time voucher program that helps in cases of emergency.”

The Bargain Bucks are issued in $5 increments and are provided to churches, women’s shelters and other pertinent civic groups.  The store itself does not issue the vouchers, but provides them to community groups. Those groups are able to give the Bargain Bucks to those in need as they deem appropriate.

Once Bargain Bucks are issued, they can be used to buy anything in The Opportunity Shoppe, which is a local thrift store which has clothing,  general household goods and seasonal items.

While the program has been in operation for several months, the recent flooding of the town of Windsor and the subsequent losses suffered by many residents made it even more necessary.

“The program really kicked in during the flooding of Windsor,” Spruill said. “We  were able to issue about $500 worth of Bargain Bucks to community organizations for flood victims and many of them have already been used.”

The program is made possible through funding from a grant by the Bertie-Hertford Women’s Fund and another by Southern Bank.

Spruill said she hopes that churches and other organizations in Bertie County and the surrounding area will take advantage of the program.

“We want churches or social service organizations to apply for them so they can distribute them to those in need,” she said. “The application process is very short and will only take a few minutes.”

Those wishing to become involved in the program may stop by the store on Granville Street in Windsor during normal business hours which are 10 a.m. until 5 p.m. Monday through Friday and 10 a.m. until 2 p.m. on Saturday. They may also call Spruill at 794-5595.

In addition to the new program, the Opportunity Shoppe is continuing to provide a free bin behind the store for those in need. It is located near the drop-off area and is restocked regularly.

The Shoppe is also beginning a cellular phone recycling program and Spruill asked that anyone wishing to recycle a cell phone or charger drop off the item at the store.

For the respective roles they played in the kidnapping and subsequent murder of Ahoskie resident Donald Bradley “Brad” Smithwick, Raymond... read more