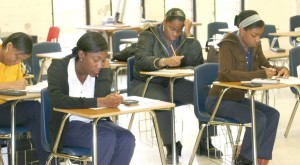 Roanoke-Chowan area classrooms, including this one at Hertford County High School, may feel the pinch of potential state budget cuts.

RALEIGH – Potential budget cuts at the state level could have a major local impact on public schools.

Last week, the North Carolina Department of Public Instruction (DPI) released figures that were submitted to the Office of State Budget and Management listing possible cuts of five and 10 percent from school districts.

According to DPI, teacher layoffs, larger class sizes, fewer courses and less help for students will be the consequences if the school funding is cut by five or 10 percent.

“At a time when everyone seems to believe that education and learning are keys to survival in the global economy, we cannot turn back the clock,” said State Superintendent of Public Instruction June Atkinson. “North Carolina public schools received less from the state’s general fund in 2010-11 than in 2006-07, even though we now have a least 40,000 more students.

“These cuts would continue this under-funding,” she added. “We have already reduced non-essential costs. Additional cuts will hit the classroom and hurt teachers and students.”

Staff from NCDPI noted that the cuts identified to reach the five or 10 percent level are in addition to the four percent budget reductions that are an ongoing part of the state’s public school budget.

According to the information released by officials with DPI, cutting five percent, which would be a total of $701 million when the recurring hole is included, or 10 percent, $1.1 billion with the hole included, would be the equivalent of eliminating funding for nearly 165 schools.

North Carolina is the sixth fastest growing state in the nation with student population, but currently ranks 42nd in the nation on per-pupil spending.

While some of the cuts would be absorbed by the NC Department of Public Instruction, major cuts could also come to the local school districts.

If a five percent cut were passed, Bertie County Schools and Hertford County Public Schools would each lose 8.5 classroom positions for the 2011-12 academic year at a cost of $467,908 for each district.

North Carolina funds teachers by allotment, meaning the number of teachers is determined by the amount of funding provided in that line item of the budget. That is why the funding allotments would cut teacher positions.

While being a major part of the cuts to the local district, teachers will not be the only ones suffering if the 2011-12 state budget passes on significant education cuts.

Instructional support positions would be reduced in each of the counties as well at a rate of two for Bertie and Hertford counties and one for Gates and Northampton counties under the five percent cuts. The 10 percent cuts would not change the cuts for Bertie, Hertford or Gates counties, but would change Northampton’s losses to two.

In the 10 percent reduction scenario, the number for Bertie and Hertford counties would jump to eight months, with six for Northampton and four for Gates County Schools.

The major losses, however, would come in the teacher assistant positions. With a five percent reduction, teacher assistants would be eliminated at grade three and placed in only half of second grade classrooms.

A 10 percent cut would mean teacher assistants would be eliminated in all classrooms except kindergarten.

The total cost in cuts, should the North Carolina General Assembly slice education funding, would be in the millions of dollars in the Roanoke-Chowan region.

Northampton’s losses will be $885,202 with a five percent cut and will move over the million dollar mark ($1.38 million) with a 10 percent decrease.