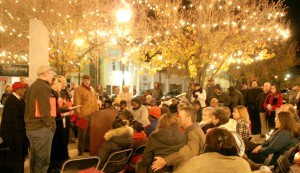 Under the holiday lights of No Man’s Land Park, a crowd gathered Sunday evening in downtown Ahoskie where the town’s Christmas tree sprang to life. Staff Photo by Cal Bryant

AHOSKIE – On a night fitting the occasion, the Town of Ahoskie officially ushered in the Christmas season.

Even Sunday evening’s brisk temperatures in the 30’s could not keep a large crowd from gathering at No Man’s Land Park on Main Street where Ahoskie Mayor Linda Blackburn, assisted by Girl Scout Daisy Troop #1702, threw the switch on the town’s Christmas tree, thus signaling the formal start of the holiday season within the Roanoke-Chowan area’s largest municipality.

“Every year this gets bigger and bigger and it just warms my heart to see so many here on such a cold night,” Mayor Blackburn noted as she looked out over a crowd numbering close to 200.

“This could not happen without the hard work of so many individuals…they are such a great group of people to work with,” the Mayor continued. “From Mr. (Tony) Hammond, our Town Manager; to our Rec Department, Miss Tina Pritchard…she is tireless in her work; to our Public Works Department for putting up this beautiful tree; to the Ahoskie Fire Department and to our Police Department; they all make events such as this come off without a hitch. The Town of Ahoskie is blessed to have such great employees…they do a great job.”

Blackburn continued, “I also need to thank Jerry Castelloe and the Ahoskie Chamber of Commerce. Over the past couple of years the Chamber and the town have worked as a team. The Chamber is so supportive of the town’s activities.”

In his opening prayer, the Rev. Lee Edwards of Ahoskie United Methodist Church touched on the light of the world provided by Christ.

“We light this tree to remind us that the light of Christ has entered the world. May we always rejoice on that light which shines in our heart,” Rev. Edwards said.

Also on Sunday’s agenda was Brunet Parker, advisor for the Hertford County Middle School FBLA (Future Business Leaders of America) program. She was joined by her young colleagues to pass out candy canes to those gathered for the event.

“We want you to remember this special season through these candy canes,” Parker said prior to briefly explaining the history behind the candy cane.

The hour-long program also included songs of the season. The St. Thomas Episcopal Church Choir, a solo from Orlando Reed and a duet performed by Patrick and Hanna Rose put everyone gathered in the holiday spirit. The crowd also joined in on group caroling, led by Reed and the Episcopal Choir.

The night was capped off by a visit from Santa Claus, who arrived at the park, with sirens blasting, onboard an Ahoskie fire truck. Jolly Old St. Nick took the time to visit with the local children, each sharing their Christmas “wish lists.”

Refreshments were served, including cookies, as well as piping hot apple cider and spiced tea provided by MugShotz Café.

WILSON – Last Tuesday night, the Warriors travelled to Wilson to take on the number five team in the 1-A... read more