Starting over…from the ground up 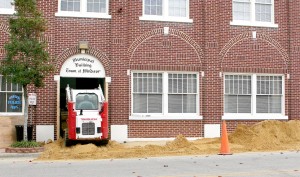 Work is underway to provide new flooring at the Windsor Town Hall. The first step is placing sand in the 38-inches between the floor and the ground to provide stability for a new cement floor. Staff Photo by Thadd White

WINDSOR – Windsor officials continue to work diligently to get back into Town Hall.

Windsor Mayor Jimmy Hoggard, however, reported that may not happen for another two months because of the extensive work being done inside the old structure.

“It is solid and was well-constructed,” the mayor said, “but it is totally out of date and has never been completely remodeled.”

That remodeling process was in the beginning stages when flood waters swept under the building in the aftermath of Tropical Storm Nicole. The flooding under the structure, however, proved to be the proverbial straw that broke the camel’s back.

Instead of proceeding slowly through the renovation process, the town was forced to tear out the flooring due to mold that had been found under the facility.

“We were working on remodeling anyway, but this certainly hastened our plans,” Mayor Hoggard said. “I guess the good thing is that if we had started sooner, we would be tearing out new stuff instead of the old. It’s not what we wanted, but it will work out okay.”

Because of problems found underneath the building, the town is currently having the foundation covered with sand. Mayor Hoggard said there were places under the building where there was a depth of 38 inches from the floor to the ground.

Now, the sand will be poured into those places and a concrete floor will be put into the building. That is being done to keep any future flooding from causing the massive cleanup currently underway.

“If we are flooded again, we will be able to spray it with Clorox, wash it with a water hose and keep on going,” he said.

In addition to making repairs, the town is proceeding with the work provided by the state energy grant. That grant will pay for new windows and doors as well as a heating system.

“While we’re working, we are re-plumbing the Town Hall, adding new wiring and wiring the building for computers, the internet and so forth,” Mayor Hoggard said.

The upstairs renovations, which will add a new office for Town Administrator Allen Castelloe and upgrade the mayor’s office, are also under way.

In the meantime, the town staff continues to operate from a mobile unit located in the parking lot behind Town Hall.

“People have responded well to the mobile unit,” Mayor Hoggard said. “It’s certainly not ideal, but the town staff has made the most of it. The employees are doing a good job of making do.”

JACKSON – Be aware of a possible scam. Northampton County health officials are warning restaurant owners to be careful of... read more