One pint at the time 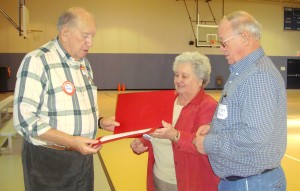 GATESVILLE – “It didn’t even hurt,” said B.H. Brown after the nurse pricked his arm to draw blood.

Of course, anyone who knows Brown likely knows that he has no qualms about needles. Brown felt the gentle intrusion of another needle here recently when he donated blood at the Gates County Community Center. Actually he can be found there every 56 days, as that’s how long one must wait between donating. And Brown, the most faithful of faithful donors, gives every chance he can.

But Nov. 3 was different; this would be a special blood drive for the 78- year-old Sunbury native as he was recognized by the American Red Cross for donating his 26th gallon of blood. To give you an idea of how much that number represents, an individual donates one pint per visit, so with eight pints in a gallon we’re talking 208 donations.

While this is an incredible figure and certainly reflects Brown’s dedication to participating in blood drives, it actually does not do justice to the actual number of times he has donated throughout his life.

Brown’s days of donating began as a young man while serving his nation in military service. During his four years as a pilot in the Air Force, Brown found himself frequently giving blood.

“Of course there it wasn’t optional,” said Brown.

Brown found more than a passion for donating while in the military; he also discovered his love for flying.

“I got over 5,000 miles (logged) up there (in the air) and loved it,” said Brown. “I still got pictures I took over the North Pole while stationed in Iceland for two years.

Brown has a pilot’s license and still flies, working part-time as an aerial photographer. He also worked for over 30 years as an insurance salesman for life, health and annuities policies. He still dabbles on occasion in that profession as well.

Today, Brown’s time and energy is not so much focused on work or hobbies, but is dedicated to his wife, Joyce, who suffers from Alzheimer’s disease. While she remains at home in the care of her husband, it is, of course, a difficult situation.

“It’s like a nightmare” said Brown, “nothing about it seems right.”

According to Brown, he is on the losing end of a financial battle, not being able to afford the expenses of placing his wife in a nursing home, where she could receive better care. To compound the issue, though he does not have the resources to provide that level of care, he has just enough that she cannot qualify for Medicare.

Joyce Brown taught drama at Chowan University for over 20 years. While in New York earning a doctorate in drama and communications from Columbia University she played the role of Nurse Casey on the soap opera Search for Tomorrow.

“She loves drama like I loved liquor, at that time” said Brown.

December 28th will mark Brown’s 38th year of sobriety. He will be recognized for that accomplishment by his church, Saint Peter’s Episcopal in Sunbury.

“I was an alcoholic,” said Brown.

Brown consumed between two and three pints of vodka daily. After finding himself in the hospital for the third time, he decided to make a change.

After donating the pint that marked his 26th gallon, Brown made his way to the refreshment table, as he had done so many times before, where he enjoyed four small slices of bread with pimento cheese, a cookie, and a cup of soda. While there he chatted with practically every individual in attendance, having become familiar with them through the many blood drives held in Gates County.

Following his snack he was awarded a certificate of merit from the American Red Cross, which was presented by the overseer of the drive, Ruby Joyce Buck. He also received a Red Cross pen with the number 26 to commemorate his achievement, which was placed on his shirt by Foster Parrish who was at the event on behalf of this particular drive’s sponsor, the Corapeake Ruritan Club.

“I said they should have done it before. In Suffolk they did it every time I donated another gallon — I told Ruby I was going back to Suffolk,” joked Brown.

Brown plans to continue donating as long as possible and encourages others to do the same.

“It makes me feel good,” said Brown. “Maybe it’s mental, but I love giving blood, it goes for a good purpose.”

Anyone interested in donating blood can go to the American Red Cross website, select the blood drives near you tab, enter your zip code and a listing of upcoming blood drives will appear. Or you can call, toll free, and speak with a Red Cross representative at 1-800-733-2767.