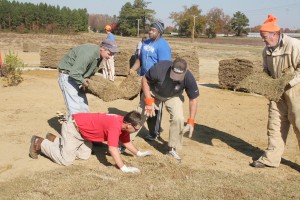 Church volunteers and Chowan University students worked hand-in-hand with professional landscapers on Saturday where the lawn of the yet to be opened Baptist Children’s Home near the St. John community sprang to life. The facility is scheduled to be dedicated on Dec. 5. Staff Photo by Cal Bryant

ST. JOHN – It stands as a future oasis for children in need of a positive home environment.

While construction is complete on the newest facility in a long list of residences under the broad umbrella of the Baptist Children’s Homes of North Carolina (BCH), there remains plenty of work to be performed prior to the arrival of those whom will soon call this brick and mortar residence as home.

On a sunny and breezy day here Saturday, volunteers from several churches stood shoulder to shoulder with Chowan University students to begin the landscaping process on the new BCH facility located on the St. John-Menola Road in Hertford County.

Saturday’s project was laying sod as well as placing trees and shrubs on the property. Smith Evergreen Nursery of Wilson provided the products, machinery and helped with the manpower.

Just seven short months ago, the land stood bare, but the dream to place a BCH in Hertford County was about to become a reality.

Thanks to a donation of 16 acres from the Britton family and the monetary contributions of area churches, the $750,000 project began to take shape also immediately following an April 22 groundbreaking. Construction began April 29, a process completed in only four months.

“It’s a Britton trait to love children and there’s nothing more comforting in my mind to know that this family’s love for children now continues with this home,” said Mary Anne Croom, a member of the Britton family, formerly of Ahoskie and now living in Edenton.

While the volunteers busied themselves with the outdoor tasks, Croom conducted a tour of the interior of the residence, a roomy eight bedroom home with a full kitchen, family room, laundry room, storage areas and several bathrooms.

The local BCH is licensed to be the home of nine children, each referred to the residence by the Department of Social Services.

“They can be children from anywhere east of Raleigh,” Croom said. “The criteria calls for placement of a child if they are currently a member of what we call a hurting family.”

Often, according to Croom, a family member will contact the Baptist Children’s Home organization to ask for help for their child.

“Most of the children come from abusive environments in their current home,” she said. “One child I recently met with in the western part of the state realized what an impact these type homes can have on their young lives. She told me that she had never before experienced the love she felt at her current Baptist Children’s Home. She later gave her testimony on stage at the Baptist State Convention.”

She told of another child, now age 15, that was referred to a BCH at age 12 after it was discovered he was abused.

“His parents kept him in a closet; he only weighed 35 pounds when he came to the home,” Croom said.

The closest BCH to the St. John site is in Kinston. There are 19 such “campuses” across the state. The youngest resident currently in such a home is two months old…they can remain until age 18.

Additionally there are “transitional” homes within the organization, meaning a child can remain there after graduating from high school and are waiting to enter college or the workforce and are without housing until the next stage of their life begins.

Those residing in a BCH are required to attend public school.

At the end of the east hallway are two “house parents” rooms, each with its own private bathroom. Those “parents” manage the facility and offer what Croom referred to as a “home environment” for the youngsters. They work in two-week shifts (two on, two off). In addition to their numerous duties they are required to fill out daily paperwork on each child, tracking their progress within the home environment as well as their schoolwork.

“We prefer having couples to serve as our house parents for the simple reason that it gives it a family feel,” said BCH Director Jeff Joyner who oversees 33 counties. “They are hired staff and there will be two sets of house parents dedicated to work at this facility.”

“Some of these children have never experienced a normal home life, with two parents providing love and direction,” Croom noted. “There will be rules, just as there needs to be within a structured home environment. The children will have chores; help with the cleaning, cooking, etc. This will be their home.”

The home also includes a case worker, hired by BCH.

“They are licensed clinicians, most having social worker or mental health worker degrees,” Joyner said. “The lady we’ve hired here is a retired Hertford County social worker. She has already undergone the mandated orientation and training.”

While the wait continues for the initial occupants of the Hertford County home, Croom’s mind wandered back to a bit of very interesting history with BCH. She told the story of Mary Presson, a nine-year-old from Hertford County that became the first-ever resident of a BCH (the original facility was in Thomasville, located in the western part of the state).

“It was 125 years ago, Nov. 11, that a preacher from Ahoskie First Baptist took little Mary on that 300 mile journey to Thomasville,” Croom noted. “Now, all these years later, my husband, Jesse (Rev. Dr. Croom) served as pastor at the same church and now we have a Baptist Children’s Home right here in Hertford County. It came back full circle.”

Dedication of the new facility is scheduled for Sunday, Dec. 5. The children are expected to arrive sometimes after the first of the new year.