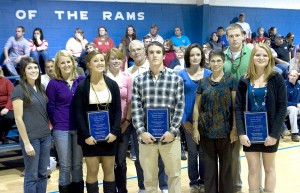 Joyce and Keith Brantley were surrounded by some of the many who have won the Lt. Nick Brantley Scholarship at the tournament named in his honor. From left to right are Betty Edwards, Lauren Lilley, Brice Harrison, Hayes Bryant, Keith Brantley, Davis Harrell, Landis Marsh, Joyce Brantley, Austin Britton and Sara Hackney. Photo by Andre Alfred / 2nd Chance Productions

While the event completed five years of great basketball, scholarship awards and trophy presentations, it also continued to honor the legacy of its namesake – the late Lt. Nick Brantley.

“It means a lot to me – more than I thought it would when we started,” said Keith Brantley, who is Nick’s father. “When we were first approached about the idea, I wasn’t sure, but Joyce convinced me.

“I’m proud of what it has become and the way things have worked out,” he added. “It makes me feel good when I see the kids compete hard on the basketball court and then see them intermingle afterwards.”

Joyce Brantley, Nick’s mother, also experienced doubts early on when the idea of a tournament was first suggested.

“I didn’t know what it would become,” she said. “I hoped it would be what it is. I still see where we have room and opportunities to do more and do better.

“Did I think it would come to this at this point? No,” she continued. “Nicholas’s legacy lives on. People are starting to look forward to it and I know that Keith and I do. It’s a way to keep Nicholas alive in our hearts.”

The event came about due to the desire of the Roanoke-Chowan News-Herald staff to provide a basketball tournament for the local independent and Christian schools to benefit their athletic budgets similar to the News-Herald Holiday Classic that is sponsored for the public schools.

“Thadd White came to my office and said the News-Herald wanted to start the event, but they needed help,” said Joe Murray of United Country Joe Murray Realty. “I quickly signed on because I loved the idea.”

The two entities – the Roanoke-Chowan News-Herald and United Country Joe Murray Realty – began working extensively to get the tournament off the ground.

To have the tournament linked with the Brantley’s was the suggestion of then News-Herald Publisher Jeff Findley.

“It seemed like the right thing to do,” Findley said at that time. “Even though I didn’t know him, every account of Nick Brantley was so impressive. If there was a way we could honor him, we thought it was a good idea to do it.”

News-Herald Editor Cal Bryant covered Brantley when he played basketball at Ridgecroft and made the original contact with the Brantley’s.

“As we talked through starting the tournament and ways to make it different, it was important to do more than just play basketball,” Bryant said. “We wanted the tournament to be representative of Nick and what his life meant. The scholarships were our way of doing that.”

With everyone signed on and Ridgecroft agreeable to hosting the event, the Lt. Nick Brantley Scholarship Tournament was born.

Joyce Brantley said combining the two made the event representative of her son’s life.

“The basketball games and the academic part of it are so important,” she said. “A lot of people didn’t realize how good a student Nick was. The combination of those two – showing his athletic and academic accomplishments that a lot of people knew him for – made it the right combination.”

“I look forward to each night we give out the scholarships,” Joyce Brantley said. “That’s the highlight for me. I look forward to that more than anything else. The kids seem so appreciative and that’s what it’s all about.”

“When I look at the candidates that are presented to us and see the ones that represent Nicholas in the way they carry themselves, the grades they accomplish and the way they play, I enjoy that,” he said.

The Brantleys said they enjoyed the opportunity to meet the student-athletes and the parents and fans during the event.

“The most wonderful part is meeting the kids,” Joyce Brantley said. “You get to see a glimpse of what they’re looking forward to and what they want to contribute. Sometimes people forget to take time to look. It’s been fun to see what they want to give back to society.”

The Brantleys said they were appreciative of the Roanoke-Chowan News-Herald, United Country Joe Murray Realty and the many people who make the tournament possible.

“There are a lot of people behind the scenes,” Joyce Brantley said. “We couldn’t do this without them and everyone does their part. I want to thank everyone that is involved.”

Both said they will continue to look forward to the event as it continues.

“When it started, it was something new and I didn’t know where it would go,” Keith Brantley said. “Now I see it as something that is very meaningful to me.

“The time of year it takes place is a hard time because a lot occurred in the fall of 2005,” he continued. “It helps me get through this time because I can focus on the tournament and be around people.”

“I ask the kids during our interviews what their dreams are,” she said. “This began as a dream. Dreams do come true.”

Lt. Nick Brantley was a student-athlete at Ridgecroft School and later graduated from Virginia Tech. He died Sept. 24, 2005 when his Navy Seahawk helicopter went down off the North Carolina coast during a training exercise.